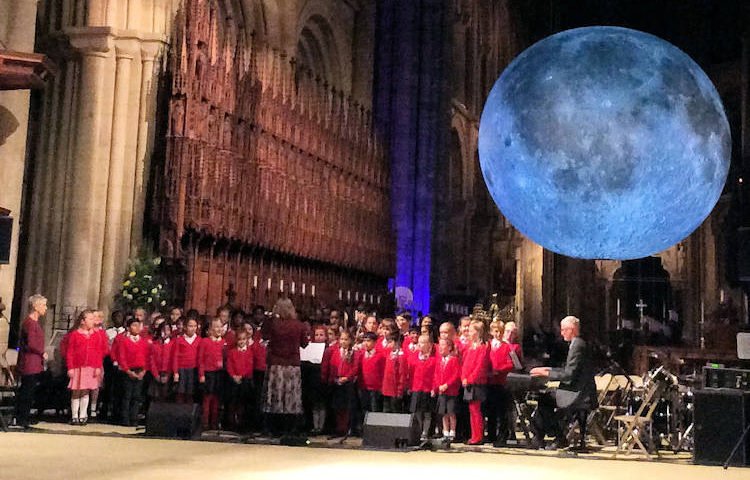 Latest news from schools across the Diocese of East Anglia include a cathedral concert, netball victory and World Mental Health Day.

Sacred Heart Primary School Choir were privileged to be invited to sing at Peterborough Cathedral as part of a concert organised by the Peterborough Music Hub. The concert was part of an artwork featuring a moon measuring seven metres in diameter with NASA imagery of the surface suspended in the cathedral.

Headteacher Mark Cooper said: “The children represented the school not only with their beautiful singing but also with fantastic behaviour and presentation. They sang with great enthusiasm. We would like to thank Fr Bruce Burbidge for accompanying the choir on the piano and the staff who gave up their time to help us. We also extend my thanks to parents for their support. A concert we will all remember.”

The choir are pictured above with the gigantic moon in Peterborough Cathedral. 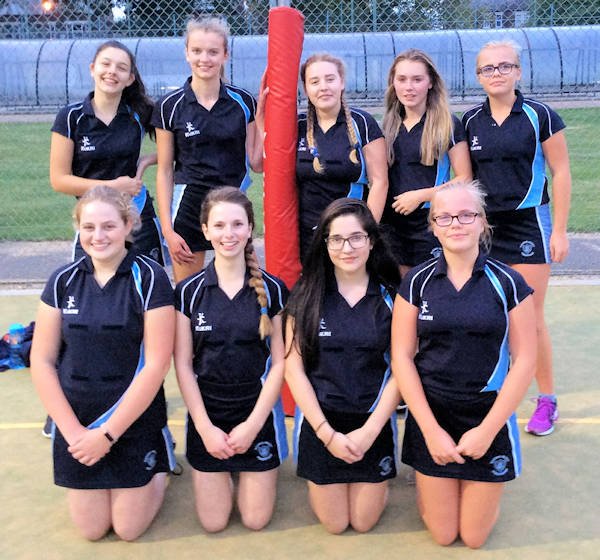 The senior girls netball team at Sacred Heart School in Swaffham (pictured right)  have won the West Norfolk regional netball competition and will now take part in the county finals at UEA, Norwich on November 17.

Sports Coach, Jeremy Hodges, said: “What a tournament it was, with a magnificent display from Alice, Hannah, Charlotte, Lucy, Hattie, Cassandra, Sophie, Bonnie and Lea. There were 10 schools split into two leagues. Sacred Heart came second in their league and beat Litcham in the semi-final. Despite going down 3-0 early on in the final against Springwood, the girls came back really strongly to win 8-6 and be crowned champions. So now it is off to the County Finals on Saturday November 17. An outstanding performance watched by Mrs Calvert and our new mascot, Maisy.” 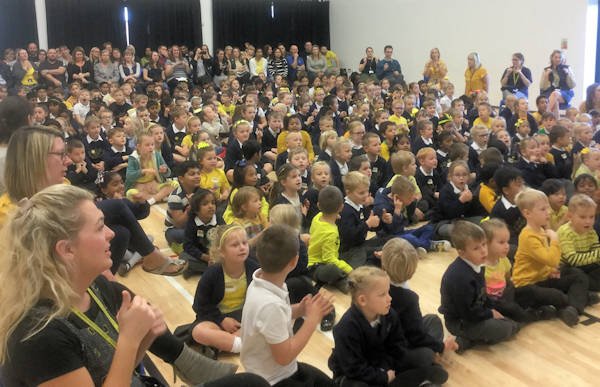 Staff and pupils at St Martha’s Primary school in King’s Lynn, took part in their first Tea and Talk/Hello Yellow event to support World Mental Health Day on October 10.  Deputy Headteacher Hayley Pink said: “Mental health is high on the agenda at St Martha’s, where the children are encouraged to talk about their feelings and take part in activities during nurture sessions and 1:1 focus groups,  both when they are facing challenges and also through the daily curriculum.”

In order to mark the day, children and staff were encouraged to come to school wearing something yellow, and all the children had lessons where they could learn about mental health and how to deal with their feelings.

Parents too were invited to join in, by attending a drop-in session where they could meet the school’s mental health champions, and chat to other parents over tea and cake, made by the staff.  There were also leaflets and books for them to browse and take away with them both on adult and children’s mental health issues.

Hayley said: “The feedback was overwhelmingly positive. Parents said that they would love to see the morning repeated, and for some it was the only chance they got to talk to other people during their day. Children in classes began talking about their own issues to their peers, it was really heart-warming to witness.

“At the end of the day £121 was raised for Young Minds through donations, but for us in the school, the impact on the children was what made it a real success,” said Hayley.