Chance to join Ignite network to pray for young people 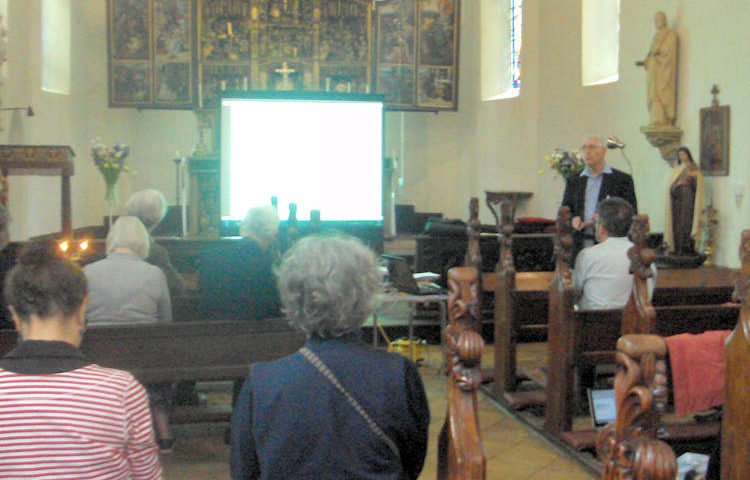 The AGM of the East Anglian Catholic History Society has just taken place and a new book about the history of Catholicism in Bury St Edmunds has also been published.

On June 9 the third AGM of the EACHS took place in the chapel of St Margaret and the Immaculate Conception at Oxburgh Hall, Norfolk (by kind permission of Sir Henry and Lady Bedingfeld and the National Trust). It exists to support parish history groups and to share news relating to Catholic history in East Anglia with its members. The meeting noted with sadness the recent death of Dr John Ashdown-Hill, a supporter of the Society who delivered a wonderful talk on Walsingham in the 15th century at last year’s AGM. A new committee was elected, and the Rev Prof John Morrill was re-elected Chairman of the Society, while Dr Francis Young was re-elected Secretary.

After the AGM, John Saunders, Chairman of St Edmund’s Parish History Group, Bury St Edmunds, delivered a talk about setting up and running a parish history group. The group at St Edmund, King and Martyr was established in 2006 and has accomplished an enormous amount in the past 12 years, which has led to exhibitions, anniversary celebrations, two books, and the cataloguing of an immense number of records relating to the parish and its Catholic schools. John gave a valuable insight into how much it is possible for a parish history group to achieve and the immensely valuable work such groups can accomplish for the benefit of future generations.

The St Edmund’s Parish History Group, comprising 11 parishioners, has just published a new history of the Church and local Catholicism which provides interesting facts and also acts as a guide for visitors.

Years of Faith is the product of a great deal of research and effort and complements the Group’s previously produced booklet The Present From Our Past which was published in 2012.

The publication is available online, as John explained: “We had always intended to widen the extent of what we had previously published and have since undertaken a lot of historic research and  also recorded events which have happened in recent times – remember that what happens today is tomorrow’s history.”

Included is the history of Jesuit times at Bury St Edmunds that led to the establishment of the Chapel and Church, the years of recusants are covered and show the commitment not only of the more notable families of the Rookwoods and the Gages.  The modern epoch of Church life is also comprehensively presented, not only in regard to its physical appearance from this decade’s redecoration but in the accounts of parishioners of their integration when moving into the parish and the resultant community cohesion.

You can read and download the book for free at: http://www.stedmundkm.org.uk/archives/years-of-faith.php