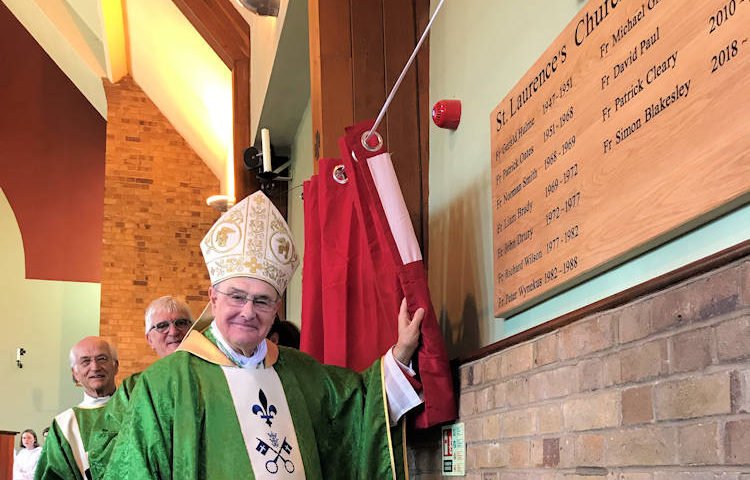 Latest news from across the Diocese of East Anglia includes a church 60th anniversary celebration in Cambridge and an interesting after-dinner talk.

At the end of Mass, the Bishop unveiled and blessed a plaque listing all the Parish Priests who have served the Parish since its inception.

After Mass Bishop Alan chatted with parishioners and viewed a photo display of St Laurence’s Parish life across the decades. It began in the 1950s when the church building was a reclaimed tin hut, originally part of the Great Eastern Hospital set up in the now grounds of Cambridge University Library to treat First World War soldiers. It continued with the laying of the foundation stone at Milton Road on March 1958 and scenes across the years to the present day. 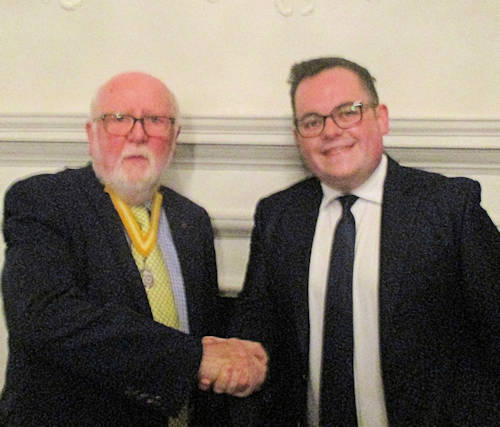 The highlight of the July meeting of Norwich Circle of the Catenian Association’s July meeting held at the Maids Head Hotel was a fascinating after-dinner speech by Daniel Justin, Director of Music for the Diocese of East Anglia who outlined his career to date.

Bristol-born Daniel obtained a music scholarship to Downside School in Somerset when he was 10 and began studying the organ with Christopher Tambling and Dr David Bednall. He continued his studies at the University of Huddersfield with Dr David Cummings, graduating in 2011 with a BMus (First Class honours) and in 2012 with a MMus (Merit).

Daniel focused his postgraduate study towards improvisation, returning to study with Dr Bednall. During his time at Huddersfield, Daniel held the Organ Scholarship at Wakefield Cathedral, working for a year as Assistant Director of Music.

He moved to Leeds Cathedral as Assistant Organist in 2011 becoming Cathedral Organist in 2013. Daniel conducted Morley Music Society and Ecclesia, a Leeds-based chamber choir. In 2015 he was appointed as Director of Music for the Diocese of East Anglia and Master of Music at the Cathedral of St John the Baptist, Norwich.

Daniel is pictured above with Norwich Catenians president Tony Baker.