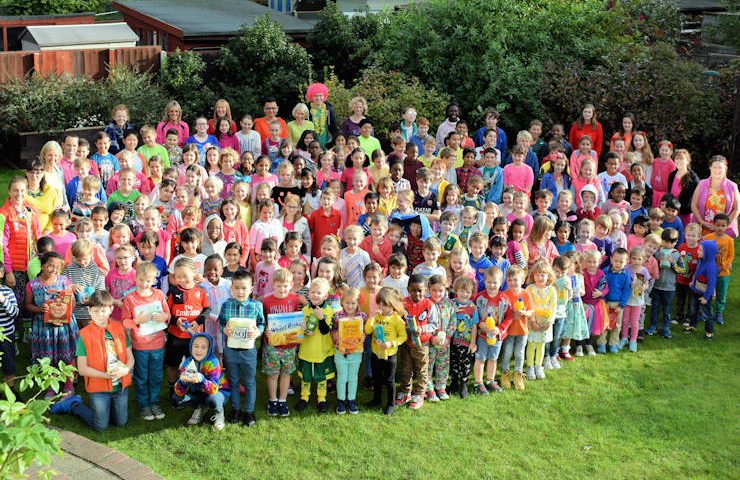 Latest news in brief from schools across the Diocese of East Anglia includes a colourful school, thinking outside the box and the Day of the Girl.

Pupils from Notre Dame Prep School in Norwich(pictured above) have raised over £260 to help overseas communities living in poverty to grow enough food this Harvest.

The school held a day of fundraising to help improve the lives of young people around the world as part of development charity CAFOD's Brighten Up Harvest campaign.

Jo Graham, the Parent Teacher Association liaison officer, said: "The students and staff of Notre Dame Prep came to school in their “brightest” clothes and the school was awash with colour. The children also brought in donations of tinned and dry foods for the Norwich Foodbank and donated £1 each to CAFOD's Harvest Fast Day collection."

CAFOD works with communities like those in El Salvador – a small country in Central America with a population smaller than London. With support, farmers are learning sustainable farming techniques, women are setting up small businesses and urban communities are finding ways to cope with the violence around them and to build peace.

As a result, people are escaping poverty and transforming their lives so that families have enough food and children can go to school and achieve their dreams.

CAFOD's representative in Norwich, Jane Crone, said: "Harvest is a time of abundance of both crops and of life in the community. This day of fundraising has shown the abundance of compassion in Notre Dame whose kindness will help communities in El Salvador and around the world.

"Archbishop Oscar Romero, who was assassinated after he spoke out for poor people of El Salvador, said: "We plant the seeds that one day will grow'. Our Harvest appeal is about literally planting seeds but also about standing with people to ensure that they can prosper. This wouldn't be possible without the generosity of pupils like those at Notre Dame."

Donate to the Harvest Appeal at www.cafod.org.uk/harvest

St Mary's Junior School, Cambridge, celebrated the very idea of ideas recently, by scheduling a week's worth of activities to get all pupils thinking outside of the box, inspired by the University of Cambridge's Festival of Ideas which runs for a fortnight.

For a week in later October, pupils from Reception through to Year 6 attended a series of talks at school on subjects ranging from "Why do we compare ourselves to others?' to "Will robots rule the world?' and much more in between.

Dr Molly Taylor, Senior Scientist at AstraZeneca, delivered a talk titled "Will we ever find a cure for cancer?' to pupils in Year 3 to Year 6. After sharing a brief history of what it took to become a scientist of biology, Dr Taylor explained the difference between healthy cells and cancer cells, different resources scientists use to study cancer, and highlighted that English lessons are just as important as Science lessons because scientists are required to write and speak about what they find during their research.

Dr Taylor said: "I was impressed to see how very knowledgeable the girls already are about the basics of cell biology ' and also incredibly inspired by how optimistic they are about a cure for cancer being found."

In partnership with the Cambridge Academy for Science and Technology, where the event was held, the theme for 2017 wasSTEM solutions towards a sustainable world.The keynote was delivered by Dame Barbara Stocking, President of Murray Edwards College, University of Cambridge, titled, "Can science solve the world's problems?'

Dame Barbara spoke of her background in various aspects of science, from management roles in the NHS to working as CEO of Oxfam GB. She shared examples of the many ways in which her STEM-based education enabled her to “save the world” in these different roles, from supporting teams in West Africa in the fight against river blindness, to her role at Oxfam, keeping enthusiastic campaigners in check and challenging evidence.

She explained that “science helps to make sure you get it right”. Dame Barbara also highlighted that girls should find out what they really love, stating: "when you think ‘are they really paying me to do this?’ you know you’ve found the right job for you!"

The rest of theday centred around empowering young women to consider STEM subjects and not to be put off by any stereotypes that they may encounter. Speakers included marine ecologists and engineers, astronomers and programmers, entrepreneurs and environmental sustainability consultants, each telling their own story about being a woman in science.