A life-changing year for Jess with Ignite team

Latest news from across the Diocese of East Anglia includes creative Easter celebrations, a tribute to Deacon Raymond Howling and a cancelled abuse survivors’ Mass.

Despite the lockdown, parishes across East Anglia have found imaginative ways to make Easter the highlight of the liturgical year.

In Our Lady Star of the Sea parish in Lowestoft, Polish families continued to celebrate Easter with their unique tradition of blessed baskets (pictured above).

On Holy Saturday (Wielka Sobota) every Polish household prepares an Easter basket (święconka) which is full of goods that will be eaten at the Easter breakfast – the most celebrated Easter meal in Polish culture. In the basket there is usually some bread, together with eggs, ham, lamb-shaped cake, sausages, salt, horseradish,( ćwikła) and nowadays also chocolate.

The baskets are decorated with white serviettes and flowers or willow branches. Normally they would be taken to church to be blessed by the priest who uses an aspergillum (kropidło – little brush that’s dipped in holy water) and sprinkles holy water over people’s heads and Easter baskets. This tradition dates back to the 7th century.

This year Easter felt very different and special because there was more time to pray and spiritually prepare for Easter.

Many families connected online with their favourite local church in Poland, lit candles in the room and joined in with services from Poland. The Polish Community in Lowestoft made video calls and Whatsapped each other every few days to keep in touch and support each other.
People who had been too busy in the past to attend services and the Stations of the Cross were able to focus  on Holy Week.
Easter Baskets were blessed by the Priest in Poland in a virtual service, and people also made Easter trees. There was not as much food as usual on the table but it was still very enjoyable.
As many as 60,000 people were recorded attending services, and according to some of the online comments, this was for the first time in 30 years.
Since  living in England the children have discovered the joy and excitement of the Easter Egg Hunt, which they do not have in Poland.
Wesołych Świąt Wielkanocnych – Happy Easter 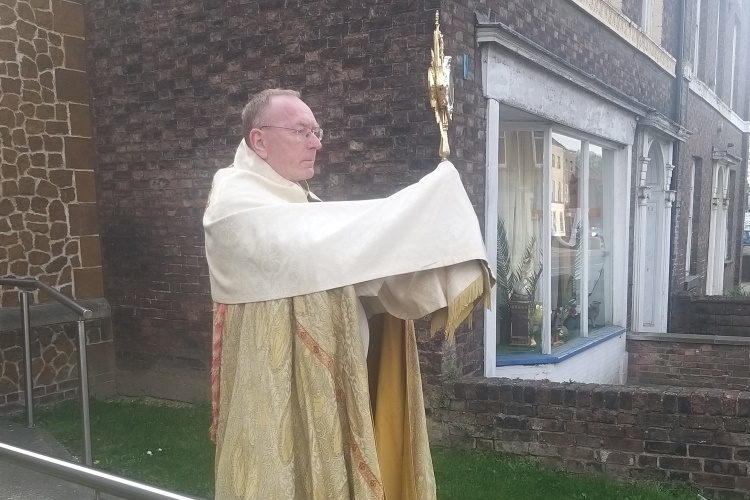 “We have not been having Vespers and Benediction since public services stopped,” he writes, “but an exception was made this Easter Day afternoon which involved opening the door – not to let anybody in, but rather to take the Blessed Sacrament out.  After Vespers had been sung at 5pm, Benediction was given outside the door with intention for the town and the Deanery, and particularly for all (patients and staff) at the Queen Elizabeth Hospital.”

Deacon Raymond Howlings died last week at the age of 97. He was one of a large group of men ordained for the permanent diaconate by Bishop Alan Clarke for the Diocese back in 1991 and served in the parish of St George’s, Norwich.

Bishop Alan said: “For some years now, Deacon Raymond he has been housebound, suffering from various medical conditions and was cared for sacramentally and pastorally by Fr Sean Connolly and parishioners at home. May he rest in peace. The Diocese offers its condolences and prayers to his nephew and other family members.”

A special Diocese of East Anglia Mass for victims and survivors of abuse, their families, supporters and all those affected by abuse, set to be held in Wymondham on April 25 has been postponed due to the coronavirus outbreak.

The Mass was due to be held at Our Lady and St Thomas of Canterbury Church, Wymondham. Rebecca Bretherton, of the Diocesan Safeguarding Commission, said: “Once we have an idea about what future dates are possible we will make further plans, using material from the original date.”