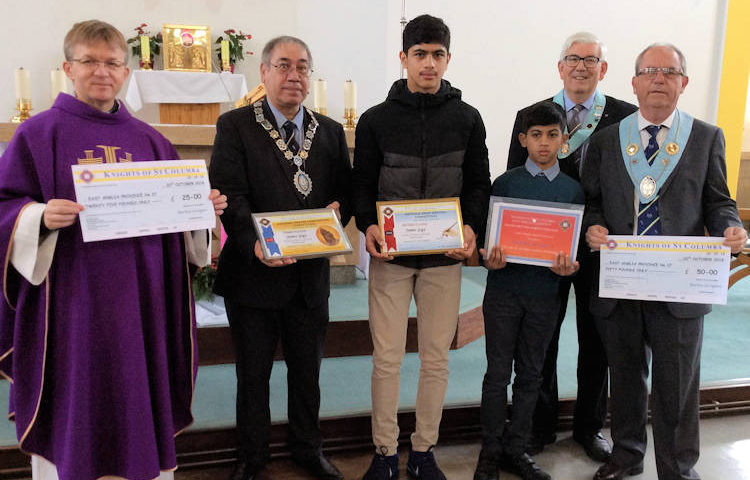 Students from a Suffolk Catholic High School and a Peterborough Parish have won awards in this year’s Knights of St Columba East Anglia Province 27 essay and prayer writing competition and two went on to receive national accolades.

Niall McMorrow took first place in the East Anglia and national KS3 Essay Competition winning £75 and a trophy for himself as well as being named overall winner in Key Stage (KS) 3 & KS4 and £250 for St Alban’s School in Ipswich where he is a student. His essay was on Homelessness in the UK. Fellow St Albans students Ruth Westland and Felicity Moore won regional prizes for their entries in the same category. The awards were presented at St Albans on November 5

This year the Gigy brothers from Our Lady of Lourdes Parish, Peterborough, entered both the Essay and Prayer writing competitions

James Gigy won the East Anglia Year10 KS4 prize for his essay on Good Citizenship and went on to take second place nationally for his KS4 essay and third place for his KS4 prayer.

His brother Thomas took first place in East Anglia for his Year 7 KS3 prayer. The awards are due to be presented at the 9.15am Mass in Peterborough on December 2.

Past Provincial Grand Knight, Br Christopher Brooks, said: “It was great to have such a large group of high quality entries on diverse subjects to choose from in this year’s essay competition. Many congratulations to the Year 7 RE class at St Alban’s Catholic High School, Ipswich for providing the entries which is a credit to the School, their chaplain and RE teacher. Niall’s offering was especially pleasing and fully deserves the national recognition gained for himself and the school.

“Hopefully the other Diocesan high schools will take up the challenge next year in both competitions as St Alban’s say they will do for the prayer writing competition in 2019.

“Very well done also to the Gigy brothers, altar servers at Our Lady of Lourdes church Peterborough, who entered both competitions successfully this year, winning prizes for the second year running. They certainly rise to the challenge through their own initiative and prove that ‘you have to be in it to win it’, a good moral for a successful life journey.”