The new Catholic Bishop of East Anglia, Rt Rev Alan Hopes, who was installed at the Cathedral of St. John the Baptist, Earlham Road, Norwich on 16th July this year, led a celebration last weekend that drew together an estimated 3,500 Catholics from Norfolk, Suffolk, Cambridgeshire and Peterborough.

The celebrations, which covered three days, were to mark the end of a Year of Faith called by Pope Emeritus Benedict XVI.  Bishop Hopes described the period of 13 months as “a time for rediscovering the joy of faith – the freedom and hope that knowing Christ and His message of love, brings to our lives.”  Recent years have indeed seen a revival in confidence amongst Catholics in the United Kingdom.  In the aftermath of the visit of Pope Benedict in 2010, we witnessed the so-called ‘’Benedict Bounce” and in the early months of Pope Francis’s ministry a ‘Francis Bounce” with a 20% increase in Mass attendance at the Catholic Cathedrals around the country. 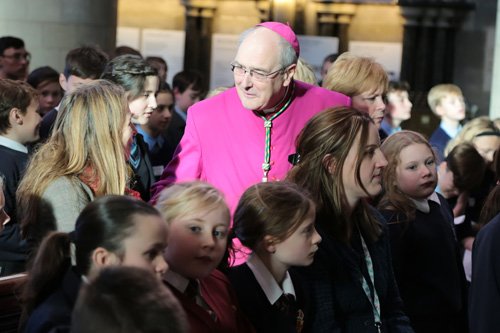 Certainly, joy was one of the dominant features of the opening Mass on Friday 22nd November which drew over 1,000 young people, representing the 30 Catholic Schools that serve the region.   The music was led by choirs and orchestra from the schools.  Bishop Alan spoke in his homily of heroes of faith: St Edmund, the martyred King of the East Angles, and Blessed Mother Theresa, who showed both courage and compassion drawn from the example of Christ.  “With God’s grace,” said the Bishop, “if you keep close to Christ and His Church, you too can become heroes of faith – making the world a more just and joyful place in which to live.”  At the end of the ceremony each school received a special candle as a sign of the Light of Christ which was to be taken from the Cathedral and lighted in school. 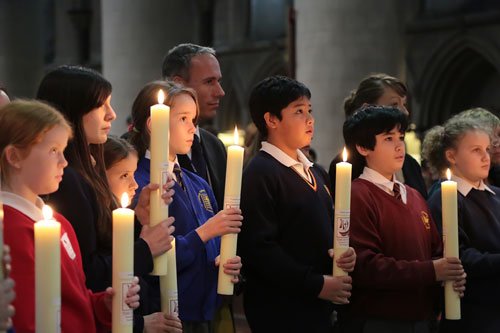 The Mass was followed by lunch and then older secondary school pupils stayed on for an afternoon of activities and discussion before they joined hundreds of people on Castle Hill in Norwich from where a candle-light procession wound its way through the centre of historic Norwich to the Catholic Cathedral.  The Eucharistic Procession, in which the Bishop carried the Blessed Sacrament, in which Catholic’s believe Christ to be truly present in sacramental form, numbered around 700 people, who were joined by others on the route to the Cathedral, and hundreds more who were unable to make the walk who waited in the mighty church built by the 15th Duke of Norfolk. 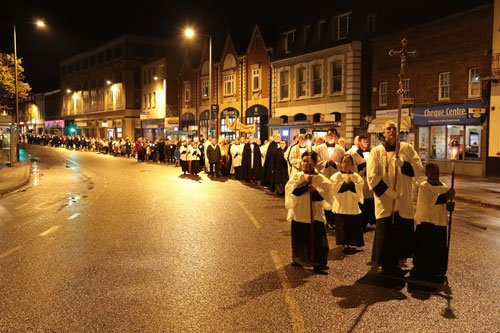 The procession moved with silent and prayerful dignity through the city, and young people from the UEA Catholic Society and the Diocesan Youth Council handed out leaflets explaining what was going on to people who were in the streets, or who came out of restaurants to watch.  The leaflets explained that this was a procession in which we were praying for all the people of the City and the Diocese as a sign of good will and commitment.  “In this way, we hoped to make people aware of the loving presence of God who does not remain aloof from men and women, but who desires to let them experience His love in the Mass, the Scriptures and in the lives of Christians,” said Bishop Hopes. 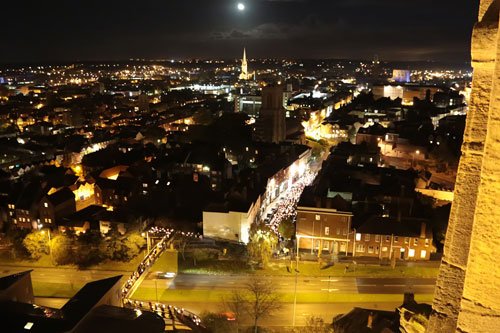 The Procession marked the beginning of an all-night vigil of prayer in the Cathedral where each hour saw young people from one part or other of the huge diocese leading prayer which included, readings, meditations, liturgical dance and personal testimony.  Even at 3am there were 150 people at prayer.

The Bishop drew the Vigil to a close at 10am with Benediction and preparations began for a closing Diocesan Mass which saw the Cathedral filled to capacity again.  The Bishop reminded the congregation that the Year of Faith had not been an end in itself, but was meant to be the springboard into a new era of evangelisation.  “We must let Christ touch and transform our personal lives so that our actions are in tune with the faith we profess.  We must let that same Christ touch our parishes and communities so that they are ever-more welcoming places in which those seeking hope and reconciliation can meet Christ.  Finally, we must go out and share the Light of Christ with others.  That is the mission of the whole Church, bishop, clergy, religious and lay people.”  At the end of the Mass representatives of around 150 parishes and communities collected candles which they carried out in front of the Bishop.  An icon of Jesus on the Cross, which had been painted by the young people during the all-night vigil was also carried out to begin its own pilgrimage around the parishes of the Diocese in 2014. 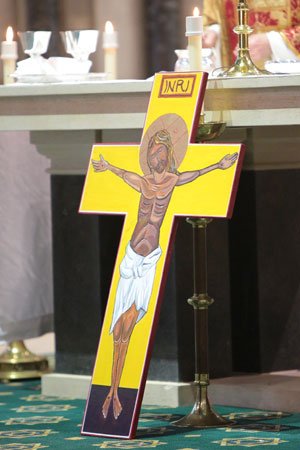 The Icon painted during the All-Night Vigil © Paul Hurst

The three days of celebrations drew to a close away from the Cathedral as the candles were received by the parish communities throughout the Diocese during an Act of Commitment on Sunday morning.  In this way the combined Mass attendance of over 22,000 was involved in these celebrations. 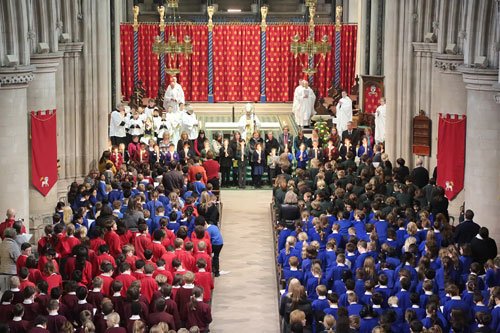 The Cathedral ablaze with light and colour © Paul Hurst

As always, the Cathedral Narthex provided a warm welcome for all throughout the night, as well as soup, and hot food.  The Bishop and many of those who participated paid tribute to the Cathedral and Narthex staff for their work, and to the Police and City authorities for the important part they played in ensuring the event passed off successfully, and safely.  This week the Diocesan Offices in Poringland have been flooded with e-mails and messages of thanks and appreciation.

Please note all pictures are copyright with all rights reserved.