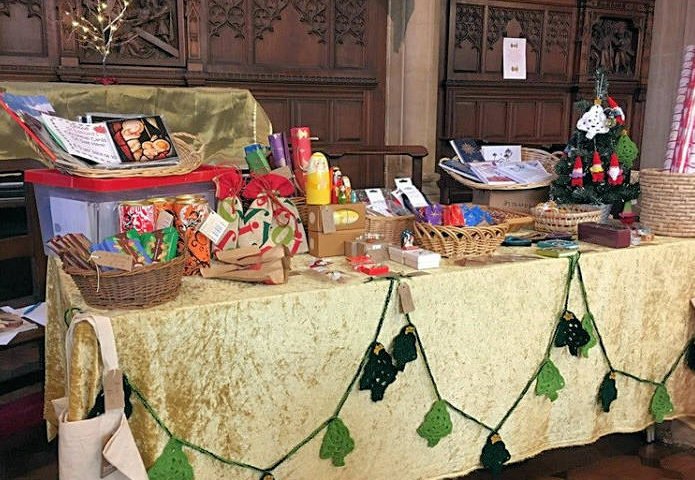 Bungay's Christmas street fair is attended by thousands every year and as part of this town event, St Edmund's invited people into the church to buy from a stall selling Traidcraft gifts. Traidcraft gives money to CAFOD, which is one of the parish's chosen charities.

The church was decorated with a Christmas tree and children from the school had made decorations for it. A children's craft table for making tree decorations was also used by many during the afternoon. A crib was set up in the Lady Chapel and people were invited to donate to CAFOD in a basket nearby.

The small team of volunteers led by Sue Altarelli and Jenny Beaugeard were encouraged by the success of the event. A headcount revealed that over 250 people visited the church from 12 noon to 4pm and most of the Traidcraft stock was sold. £140 was raised from the stall and the crib donations.

Apart from the money raised, a major success for the Bungay team was measured in the number of people who visited the church. It is also important that St Edmund's is seen as being part of such a big town event.

Some of the visitors came in for the first time despite having lived in the town for many years. Some repeated their visit from last year's fair, saying that they remembered it as the highlight of the Street Fair!

All of them found the visit uplifting and welcoming. Many were keen to light a candle by the Crib and take a few minutes to enjoy the peaceful atmosphere enriched by the plainsong soundtrack.