A Peterborough City Council education committee has heard how the proposed new Voluntary-Aided Catholic Primary School at Hamptons East in the city will offer a choice to parents who wish for a school with a Christian ethos that is tolerant and respectful of children and parents of all faiths or none. 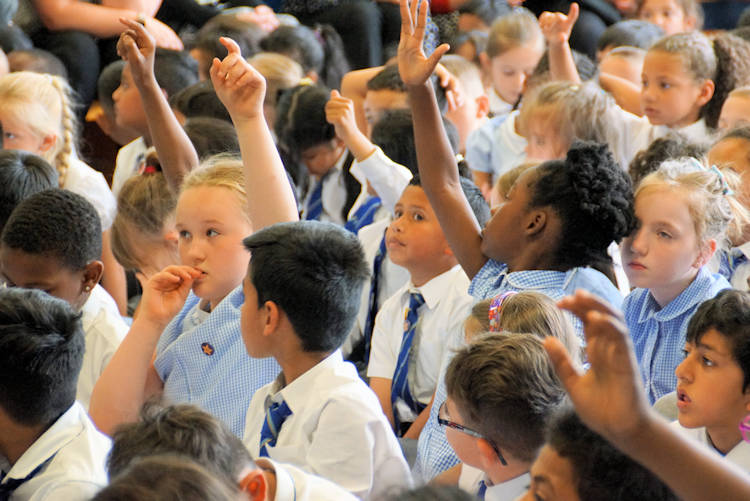 Helen Bates, assistant director of the Diocesan Schools Service, spoke to the Council’s Children and Education Scrutiny Committee, on December 17, explaining about admission arrangements, the excellent record of Catholic schools across East Anglia and the plan to serve local children.

This is what she told the committee:

“We are aware that the greatest concern being expressed about a new Catholic primary school in Hampton is the possibility of local non-Catholic children not getting a place at the school. It was in response to this concern that the Diocese made the decision to allocate one-fifth of places in the first year to children on the basis of proximity to the school.

“We refer to these as ‘open’ places. These places will only be needed if there are more children wanting a place at the school than there are places available. We don’t think this will be the case. The intention at the moment is to open with three classes each with 30 places, in the nursery, reception year and in Y1/2.

“The City Council’s own forecast figures suggest that there will be less than this number of children living in the development by September 2022 who would be unable to access a local place if this school didn’t open. However, we are aware that pupil numbers can change quickly in a new housing development like Hampton East, which is why we have introduced the one-fifth open places. If pupil numbers increase significantly between now and 2022, we will work with the City Council to decide whether more than three classes need to open in the first year. Eventually the school is expected to have three classes in every year group.

“Catholic schools, like most primary schools, overwhelmingly serve local children. Our analysis of September 2019 data has indicated that in our other Peterborough Catholic primary schools, 89% of children at Sacred Heart and 92% of children at St Thomas More live less than 2 miles away from their school and most of these live less than 1 mile away. At primary age in particular, very few parents will allow their children to travel great distances to get to school. Catholic parents are no different.

“We have been asked why we have only introduced the open places for the first year. Legally, admission arrangements can only be published a year at a time. Like all schools, the Governing Body of the new school will have to decide its admission arrangements every year and consult widely if they propose to change it from previous years.

“Finally, we do not apologise for the fact we are proposing to open a new Church school in Hampton.   The Diocese is offering a choice to parents who wish for a school with a Christian ethos that is tolerant and respectful of children and parents of all faiths or none.

“We are experienced providers of education with a track record of working closely with our local communities. We have 28 schools in the Diocese and none of them has an inadequate Ofsted rating. Our schools achieve these standards with a high percentage of pupils with English as an additional language (EAL), Pupil Premium Pupils and SEND pupils, the vast majority of whom are local children. We are proud of our schools and their inclusive approach within the communities they serve and excited about the opportunities a new Catholic school will bring,” said Helen.

Pictured above are pupils at St Thomas More Catholic Primary School in Peterborough during a recent visit to the school by the Papal Nuncio.

A consultation has shown that there is strong support for the establishment of a new Catholic primary school in Hampton East, Peterborough.

Out of those responding, 27.4% identified themselves as a parent or guardian, 48% came from the wider Peterborough Community, and 9.6% came from the Hampton community itself.

In addition to the 1,146 responses received, a petition in favour of opening a new Catholic primary school in Hampton East was signed by 321 respondents.

Helen Bates, Assistant Director of the Schools Service for the Roman Catholic Diocese of East Anglia, said; “We are delighted with the level of support there appears to be for a new Catholic school in Peterborough and would like to thank everyone who took the time to respond to our consultation. This support means that the Diocese will proceed with submitting a formal proposal to Peterborough City Council to open a new school.

In response to concerns raised during the consultation about places for local children, one fifth of the available places will now be offered based on proximity to the school and without reference to faith.

Today (September 9) the Diocese of East Anglia has launched a six-week consultation on its proposal to build a new Catholic primary school at the Hampton East development in Peterborough. 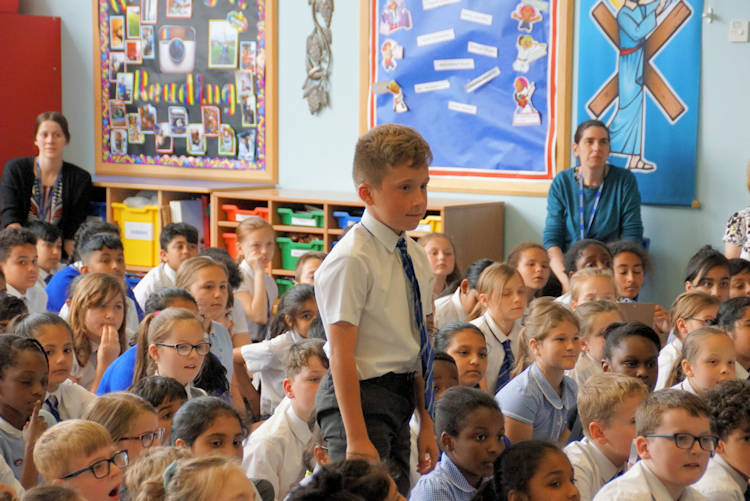 The diocese has published a consultation document that provides more details about the proposed school, including how it will be run, and everyone is invited to complete the consultation response form which needs to be returned by Sunday, 20th October 2019. Consultation drop-in sessions have also been organised at:

Helen Bates, Assistant Director for Schools, explains: “It is really important that as many people as possible respond to this consultation by completing the response form. The final decision as to whether the new Catholic primary school can go ahead will be made by Peterborough City Council, and the responses we get to our consultation will be important for the City Council in helping to determine how much support there is for the new school.”

The consultation document and response form, together with some FAQs can be found on the Diocese’s website at www.rcdea.org.uk/vaschools. Paper copies can be obtained by either emailing ssc@rcdea.org.uk or writing to Diocesan Schools’ Office, 21 Upgate, Poringland, Norwich, NR14 7SH.

All response forms must be returned by Sunday, 20th October 2019.

The Government announced its approval for a bid from the Diocese of East Anglia for a new Catholic voluntary-aided (VA) primary school for the Hamptons East housing development in Peterborough on June 14.

This school will help to meet demand for more school places in the city as well as providing more Catholic school places.

Helen Bates, Assistant Director for Schools, said: “This is fantastic news. It will provide the first brand-new, purpose-built Catholic school in this Diocese for decades. We would like to thank everyone who helped us make this bid a success by providing their support earlier this year.

“We will now need to go through a statutory consultation to make our case to the local education authority (Peterborough City Council), to approve the opening of the new school. We will be asking for people’s support once again when we do this. When this consultation starts there will be further information available on the Diocesan website at www.rcdea.org.uk/vaschools.”

It is expected that when the new school is full it could have up to 90 places or three classes in each year group. It is also expected to have a nursery.

“We will work closely with Peterborough City Council to make sure that the right number of school places are available at the right time,” said Helen.

The Diocese submitted bids for three new VA schools, with the others being in Northstowe in Cambridgeshire and Great Haddon in Peterborough.

“We were not successful with these two bids,” said Helen, “and are waiting to find out the reasons behind this from the Government. But to be successful with one is great news.”

Voluntary-aided schools are state funded and unlike free schools, have no limit on faith admissions.

“We expect that this school, like most schools in the Diocese, will have a wide mix of children of all faiths and none. On average, about a third of pupils in our schools are not Catholic” said Helen.

The Diocese of East Anglia has submitted bids to open three new voluntary-aided Catholic primary schools in Cambridgeshire, backed by over 730 expressions of interest gathered in less than a month.

The three bids, submitted on February 1, are in areas of significant housing development – Northstowe (Cambridgeshire), Hamptons East (Peterborough) and Great Haddon (Peterborough) and gained substantial public support but more is still needed, according to Helen Bates, Assistant Director for Schools.

“So far we have received 734 expressions of interest in the three schools from over 300 respondents – most people expressed interest in more than one school. So thank you to everyone who has taken the time to respond. However, we need to continue to receive more responses as the Government may ask us if this number has increased before they make a decision. Please therefore continue to do all you can to highlight this consultation to everyone you know.”

The Diocese is expecting to hear from the Government by the end of March.

“It is unlikely that the schools will start with all year groups being open. We think we’ll open the younger year groups straight away and then grow the schools one year group at a time. However, final decisions on all these matters will be made closer to the time of opening,” said Helen.

“This bidding round represents the first opportunity to build new Catholic schools in East Anglia for many years. Our Diocese has some of the severest shortages of Catholic school places in the country and, whilst there are many parts of East Anglia where we would like new schools, they have to be in areas where there is also a general shortage of places.

“We have worked closely with both Cambridgeshire County Council and Peterborough City Council, to identify these three areas where we all want more school places,” she said.

People can still express their interest and support by going to the Diocesan website at www.rcdea.org.uk/vaschools by following us on Twitter @RCNewSchools and on Facebook at RCDEANewSchools.

In 2017, the Diocese was preparing to submit bids for eight new free schools but, following the General Election, was not able to submit them as the Government decided not to follow-up on its manifesto promise to remove the cap on faith admissions in new free schools.

The three new bids will be for voluntary-aided (VA) schools, where there is no cap on faith admissions. VA schools, like free schools, are state-funded. Decisions on bids are expected from the Government by the end of March 2019.