An Austrian takes the helm at Radio Maria England

Advent series offers a walk with Jesus in Jerusalem

An Austrian takes the helm at Radio Maria England 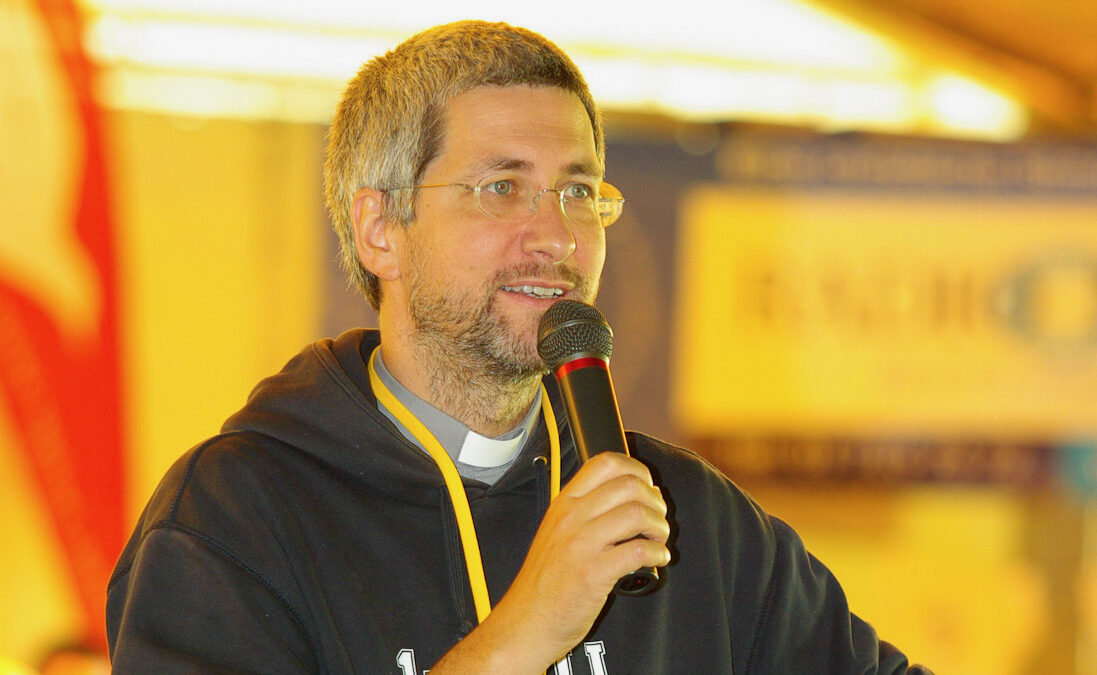 In September Fr Andreas Schätzle was appointed as Priest Director of Radio Maria England, which is based in Cambridge. He gave an interview to the diocese to help us to get to know him.

Can you tell us a bit about your family and upbringing?

I grew up in Saarbrücken, a German city on the border with France. My father was German and my mother Austrian.  This international mixture has shaped me from childhood on. Both of my parents were teachers, in German, Geography and Latin. I had an older brother and a younger sister. As a family we were often out walking in nature and in the mountains, but we also took part in cultural life: theatres, concerts, exhibitions. Early on I was a server and a musician in my parish. Sport, music and religious education were my favourite subjects at school. As a youngster I started to write songs. Later I studied music and theology and at first wanted to become a teacher. But things turned out differently.

What were the biggest influences on your faith when you were young?

Certainly, it was prayer in my family and in the parish community, but intense experiences of nature also had a big influence on my faith. My contacts with religious orders when I was young, together with vivid experiences of faith and community life, were formational for me. When I was a student, it was friendships and the shining personalities of priests which showed me the way.

How did you come to work for Radio Maria?

When I was a chaplain, a nun invited me to work with her as a volunteer at Radio Maria. I was fascinated and enthused by this mission to the whole country, which was simple and profound. Alongside biblical and spiritual broadcasts I put together a weekly broadcast for young people. In 2004 my bishop, Cardinal Schönborn, appointed me as Priest Director. Although Radio Maria is a private and not a church organisation, the relationship with the Church in the region and its bishops, and its role in supporting parishes and dioceses, is very important.

Can you tell us about a particularly memorable event at Radio Maria Austria?

An apparently insignificant, but typical event, was when a taxi driver told us that he had Radio Maria playing in his vehicle and then talked to customers about the faith. Or an organic farmer, who had Radio Maria playing on his stall or in his tractor. Or when we sent one of our staff to Radio Maria in Africa for three years and as a family of listeners funded her, which gave us a new insight into the world Church and its missionary task. Or a child, who donated some of his pocket money, because he wanted to help Mary. It was certainly a special moment when, in December 2005, after seven years, we reached break even through the donations of our listeners and have since been self-sufficient. Radio Maria is supported solely by the gifts of its listeners and the work of many volunteers.

How did you feel when you were invited to come to England?

Radio Maria England is part of an umbrella association, the World Family of Radio Maria, which now broadcasts in over 80 countries. As a long-term staff member, I have accompanied programme directors in other countries and helped to build up new stations. Long before the foundation in England I asked Emanuele Ferrario, who was then president of the world family, “What about England?” You can imagine how happy and grateful I was, when I heard two years ago that a new Radio Maria was beginning in England. And even happier when I was invited to help with it. I’ve always dreamed about such an international mission.

Many parts of the population in Austria are still much more marked by Catholicism than in England, which shows itself in many traditions. At the same time, we’ve taken up many initiatives from other countries in the last decades: the charismatic renewal, new movements, the prayer movement around Medjugorje, perpetual adoration, but also initiatives from the English-speaking world such as Alpha, 24/7 prayer, Mary’s Meals, or the Legion of Mary. All of this is a dynamic process of spiritual renewal and exchange, which in my opinion is taking place all across Europe. The Holy Spirit is at work.

What is the unique mission of Catholic radio? How does it differ from the mission, for example, of Catholic television or Catholic social media?

Radio, of course, focuses on hearing, which is certainly no mistake. “Faith comes from hearing,” as St Paul said. Radio is therefore a medium which is ideal alongside housework and cooking, or which you can listen to driving at night. Radio Maria is about proclamation, and has three pillars: liturgy and prayer, catechesis and proclamation on the faith, and human formation, or education of the heart. However, Radio Maria also tries to be present and active on social media. Many events are also made accessible through video or video podcast, which is a sign of our modern times.

What pastoral or social challenges are closest to your heart?

Even since I was young it has been important for me personally to experience and pass on a lively and fully relational faith. That’s what I’m passionate about. Through its broadcasts Radio Maria can be a mirror of the vitality of the Church in a country. Through it people from all parts of the country and even from all over the world can take part in events, to which they would otherwise have no access.

Many people say to us enthusiastically: “We were really there and experienced everything close up!” The cross-border, international work with other stations of the World Family of Radio Maria is something unbelievably enriching and important in our times, in which so many barriers and walls are being put up. On 28 November, for example, we are broadcasting the rosary worldwide the from the Kibeho Marian pilgrimage site in Rwanda. More than 30 million people are then joined in prayer and in the vibrancy of African songs and dances.

As Radio Maria England continues to develop, what do you especially hope to see?

The motto of Radio Maria, its mission statement, runs: “Proclaim the Gospel to all people at all times everywhere.” May Radio Maria, which at the moment is receivable via DAB in the Cambridge and London areas, also reach people in the whole of England through the website and app. May it help many people to open themselves anew to the presence of God. May it grow in its listeners, its colleagues and supporters in cooperation with other Christian communities in England. May it grow and at the same time remain a simple, clear and loving voice – also for those who have no voice.

How to listen to us

Pictured above is Fr Andreas Schätzle.