The Right Reverend Alan Stephen Hopes was born in Oxford, England on 17th March 1944 and was educated at Oxford High School until he moved to London in 1956, when he attended Enfield Grammar School. In 1966 he took a degree in theology at King’s College London and then attended Warminster Theological College.

In 1968 he was ordained  for ministry in the Church of England and served as an Anglican priest until 1994 when he was received into the Catholic Church.

He was ordained a Catholic priest on 4th December, 1995, by Cardinal Basil Hume in Westminster Cathedral, and for three years served as Assistant Priest at Our Lady of Victories in Kensington, London, before becoming Parish Priest of the Holy Redeemer and St Thomas More Parish, Chelsea.

In 2001, Cardinal Cormac Murphy-O’Connor appointed him Vicar General of the Archdiocese of Westminster and in 2002 became a member of The Bishops’ Conference Committee for Liturgy and Worship. The following year on 4th January 2003 he was appointed by Pope (now Saint) John Paul II as an Auxiliary Bishop of Westminster with the title of Titular Bishop of Cuncacestre (Chester-le-Street) successor to Saint Cuthbert.

This appointment made him one of the most senior members of Catholic clergy to have converted in the 1990s. On 24th January 2003 he was ordained to the Episcopate in Westminster Cathedral by Cardinal Cormac  Murphy-O’Connor.

In October 2010, Bishop Hopes was appointed as Episcopal Delegate of the Catholic Bishops’ Conference of England and Wales for the implementation of the Apostolic Constitution Anglicanorum coetibus promulgated by Pope Benedict XVI to enable those members of the Church of England seeking full communion with the Catholic Church to be received and maintain many of their liturgical practices.

On 11th June 2013, Pope Francis appointed Bishop Hopes as the fourth Bishop of East Anglia and he was duly installed on 16th July 2013 at St John the Baptist Cathedral, Norwich.

In November 2014 Bishop Hopes was made a Knight Commander with Star of The Equestrian Order of The Holy Sepulchre of Jerusalem. 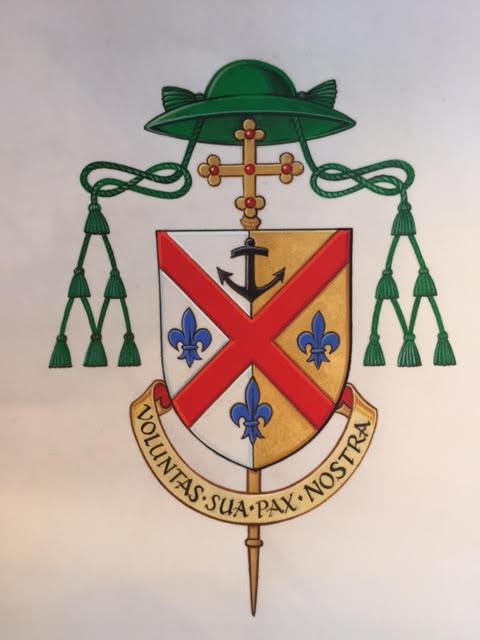 The Anchor – the symbol of ‘Hope’ – a play on his Surname

The fleur de lys, symbolising Our Lady – Patroness of East Anglia under the title of Our Lady of Walsingham and three of them denoting each of the counties forming the Diocese: Norfolk, Suffolk and Cambridgeshire

The Cross indicates the arms as those of a bishop

The translation of the Bishop’s motto: Voluntas Sua Pax Nostra is His Will is Our Peace

‘Bishop Alan Hopes was appointed Bishop of East Anglia in June 2013. Bishop Hopes was ordained priest in the Church of England in 1968 and served until he was received into the Catholic Church in 1994. He was ordained priest in the Catholic Church in December 1995. He was ordained bishop in Westminster’s Metropolitan Cathedral of the Most Precious Blood on 24 January 2003. He is Chairman of The Committee for Liturgy and is a member of the Bishops’ Conference Department of Life and Worship.