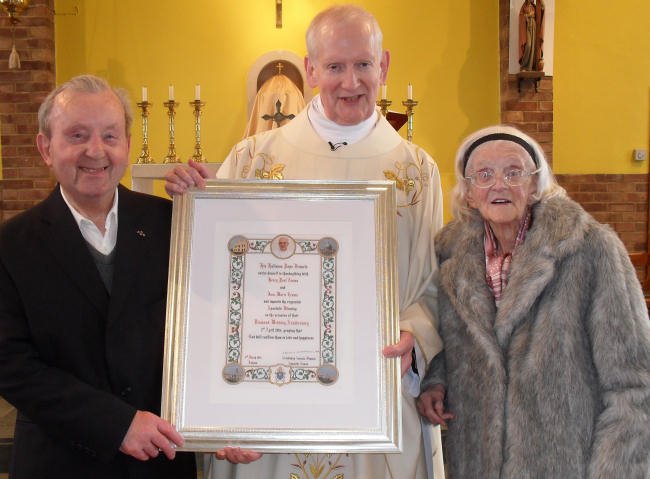 An Ipswich couple have celebrated their Diamond wedding anniversary with the presentation of an Apostolic Blessing from Pope Francis at St Mary Magdalene church in the town.

Henry and June Teuma were married in June's home city of Liverpool on April 2, 1956. Henry was 26 years old and June was 23 and both were living in London at the time, although Henry was born in Malta and came to England in 1937.

The anniversary was on April 2 and the celebration was conducted by Fr Russell Frost, parish priest at St Mary Magdalene in Ipswich at the 10am Mass on Sunday April 3. The couple then went with some of their children and grandchildren to a local hotel for a celebration lunch.

The Blessing from Pope Francis reads: "His Holiness Pope Francis unites himself in thanksgiving with Henry Paul Teuma and June Marie Teuma and imparts the requested Apostolic Blessing on the occasion of their Diamond Wedding Anniversary on April 2, 2016, praying that God will confirm them in love and happiness."

"The Blessing was a really unexpected surprise," said Henry. "Our eldest son had requested it secretly. We were over the moon to receive it and as far as I am concerned it was like receiving an MBE."

Pictured above are Henry and June Teuma with Fr Russell Frost.