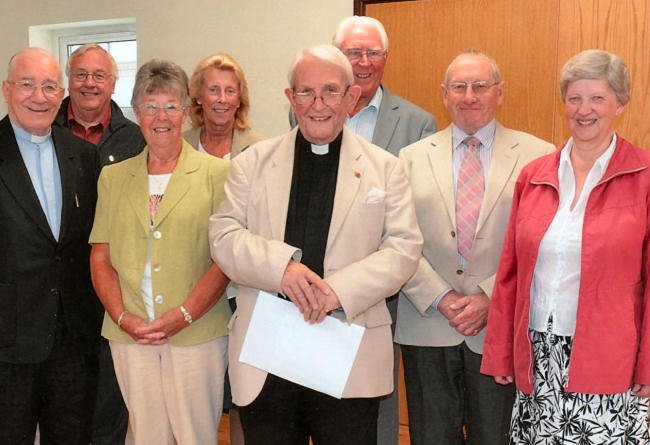 Fr David Skeoch died peacefully in the West Suffolk Hospital at Bury St. Edmunds during the late evening of Thursday March 10 and his Funeral Mass was celebrated in St Mary's Church on April 8.

Fr David, aged 78, was a renowned liturgist, a scholar and a bon viveur. As an Anglican, his most notable ministry was as Vicar of St Gabriel's, Pimlico, from 1983 until his retirement in 2007.

He had also served as chaplain to Bishop Graham Leonard, both in Truro and in London. In 2011 he responded to Pope Benedict's invitation and was received into the Catholic Church as part of the newly forming Ordinariate of Our Lady of Walsingham.

He was ordained priest by Bishop Alan Hopes on June 15, 2011 and helped out in the churches around Ipswich. His many friends in the Catholic Church, the Church of England and beyond will mourn his passing from us.

Read a full obituary in the Daily Telegraph.

Pictured above is Fr David Skeoch at the Church of the Holy Family and St Michael in Kesgrave, Ipswich.