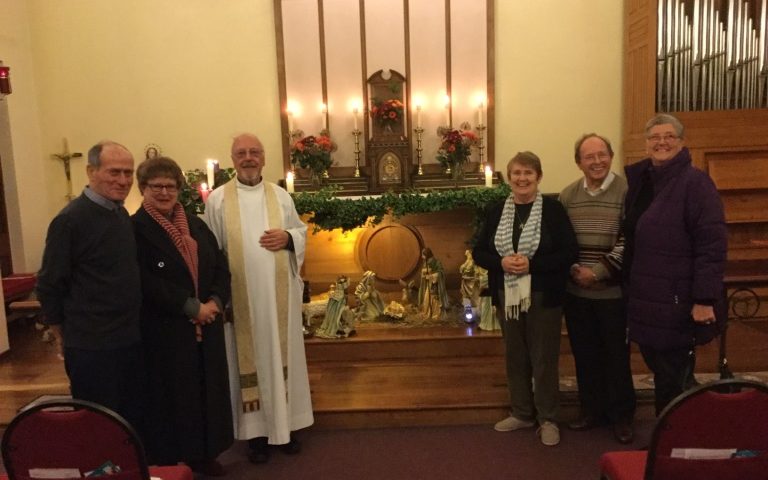 On the Feast of Epiphany 2020, St Helen’s Hoveton celebrated the anniversary of their first Crib Festival, with a blessing of their new Crib Figures.

The figures were donated by the Shippey family in memory of Liz Smith, who died unexpectedly last August.

Fr James Walsh, Parish Priest of Sacred Heart North Walsham, offered Mass for the repose of the soul of Liz Smith, who had arranged and organised last year’s Crib Festival.  He spoke of the generosity of the Shippey family in donating these beautiful figures to St Helens and thanked the family on behalf of the community.

Members of St Helens had long wanted figures of The Three Kings to complete their Nativity scene.

Also a suitable crucifix had been given by Liz’s family, from amongst her belongings, and mounted on marble. A plaque on the front says ‘In loving memory of Liz Smith’ and on the back ‘Shippey Family donated Crib Figures 2019’.

This Crucifix has been placed on the Altar for each Mass. Fr James said this was a fitting way to remember Liz who is much missed. Altogether it seemed appropriate to make the celebrations come together on the Feast of The Epiphany.

The photo shows Fr James with Liz’s sister Diana with her husband Hugh, beside the new Crib figures, and Carol and David Shippey with Pauline, Liz’s sister.