Conference to look at history of East Anglian Catholics Pope Francis has offered his prayers and support for the Diocese of East Anglia, which last night (June 3) celebrated its 40th anniversary with a Mass of Thanksgiving at the Cathedral of St John the Baptist in Norwich.

Around 1,500 people, many of whom came from the 50 parishes of the Catholic Diocese of East Anglia, attended the Mass when the preacher was Cardinal Vincent Nichols, Archbishop of Westminster and the chief celebrant was the Bishop of East Anglia, the Rt Rev Alan Hopes.

Cardinal Nichols said: "The Cathedral houses the images of three East Anglian saints of the first millennium: St Felix, St Etheldreda and St Edmund: a bishop, an abbess and a king. They remind us that faith in these parts is as old as the hills. And they offer us a challenge to be diligent in our mission to live out the faith, playing our part in the continuing story of Christianity in East Anglia now and into the future."

The Solemn Diocesan Mass was presided over by Bishop Alan, who said: "In the 2,000 year history of our Church, our 40 years may seem rather small and insignificant but, of course, these few years mark not only a beginning but also a fruition of a long period of evangelisation and Christian witness in this part of England.

"Over the past 40 years, the Diocese has made its mark in the life of the whole Christian community, in its involvement with and outreach to the neediest and most vulnerable in our society. The Catholic community has played its full part in working together and co-operating with other Christians, especially in seeking the common good of all."

ApostolicNuncio to the UK,ArchbishopAntonioMennini, brought Pope Francis' message of support and prayers with him to the Mass, and it will be read out at Masses across the Diocese this weekend. The Nuncio also presented a Year of Mercy medal from Pope Francis, which will be displayed at the Cathedral.

The Pope's message reads: "His Holiness prays that you may all be renewed in your love of Christ and, in turn, revitalize your parishes, so that all may be "a community of communities, a sanctuary where the thirsty come to drink in the midst of their journey and a centre of constant missionary outreach' (Evangelii Gaudium 28). In this way, you will manifest God's love and mercy to the broader community and share the richness of our faith in Christ Jesus. Commending the Diocese of East Anglia to the loving protection of Our Lady of Walsingham, Pope Francis willingly imparts his Apostolic Blessing as a pledge of peace and joy in the Lord."

Other guests at the Mass included the Archbishop of Southwark (a former bishop of East Anglia), together with six other bishops, as well as local civic and religious leaders representing each area of the diocese which covers Norfolk, Suffolk, Cambs and Peterborough.

The Diocese came into existence 40 years ago, when Pope Paul VI approved the creation of the Diocese of East Anglia, and, on June 2, 1976, Bishop Alan Clark was installed as its first bishop. At the same time the church of St John the Baptist in Norwich became a Cathedral church, one of the largest in the country.

The congregation enjoyed a reception after the Mass and a special piece of anniversary birthday cake produced by Sheena Barker.

Click here to see an online video of the anniversary Mass.

See below for a full picture gallery of the anniversary Mass 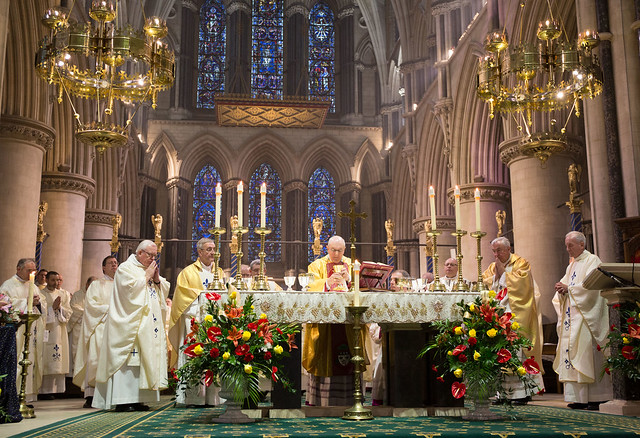