Alive in Faith provides lift and kitchen for Stowmarket 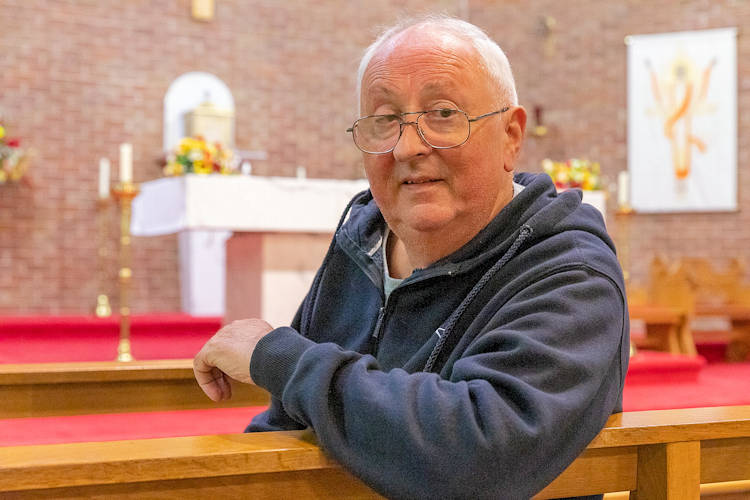 A Catholic priest who spent more than five weeks in critical care at the Queen Elizabeth Hospital in King’s Lynn, due to Covid-19, has praised the  efforts of doctors and nurses, as well as two church ministers, for helping him to pull through. Keith Morris reports.

Fr Michael Stack from Coventry “died” twice and was on a ventilator for three weeks and in critical care for five weeks before he miraculously pulled through, astonishing the medical team with his recovery.

He is full of praise for the doctors and nurses – but he also drew strength from being visited and prayed for by Catholic priest Fr Gordon Adam and Baptist hospital chaplain Rev Lee Gilbert.

Fr Michael himself has spent 25 years as a hospital chaplain so knows the vital role chaplains can play for many patients.

As the author of a book entitled Lord When Did We See You Sick, about the healing power of prayerful companionship with the sick and dying, Fr Michael feels the experience has only strengthened his faith.

Prayers were said around the world for him as he lay unconscious with the most severe form of the virus in the Queen Elizabeth Hospital.

He fell ill at the start of a short break from his role at Christ the King in Coventry where he had been supporting the parish and deanery in his semi-retirement.

The 69-year-old, who during his church career was hospital chaplain at four high profile hospitals in Nuneaton, Wolverhampton, Birmingham and Coventry working in critical care wards, was planning to stay with his sister in Dereham.

Within a short time of arriving in Norfolk he had developed a bad cough and started hallucinating. He was admitted by ambulance to hospital.

“I was on a ventilator for 21 days and 36 days in critical care,” said Fr Michael. “I don’t remember much because I was completely medicated – a blessing in disguise.

“When the priest came in, to give me the sacrament of anointing, it was quite strange because I had been independent for so long – but we all need other people. The knowledge of having the sacrament helped me, I felt better. It strengthens my faith to know that we are part of the healing process of Jesus Christ.”

Fr Michael had a tracheostomy to help his breathing and he had to learn to walk again after his 10-week hospital stay.

Fr Gordon Adam, Assistant Priest at King’s Lynn Catholic Parish, saw Fr Michael at least twice and ministered the sacraments to him. He said: “In hospital during the pandemic, especially with routine visiting in the hospital being prohibited, the work of chaplains to help people practice their faith while experiencing serious health problems becomes more important than ever. In the most extreme cases it is spiritual ‘critical care’ to help someone facing death know that their sins are absolved so that they can be at ease with God.  It also matters that while the medical staff are frequently having to work very hard and fast to get everything done, chaplains make sure that there is as much time as it takes, not just for spiritual care in the strict sense, but in the broader sense of helping the patient to feel like a whole person, not just a medical case.”

On Easter Sunday, Baptist hospital chaplain Rev Lee Gilbert received a call from critical care nurses asking him to say some prayers for a Catholic priest who was under their care. Lee used Facetime with the nurses holding an iPad near to Fr Michael.

“Whilst I had no idea as to whether Fr Michael could hear me or not, I knew that God could hear me and afterwards I spoke to Fr Michael’s sister and told her what I had done and I believe it gave her a great deal of comfort when she herself could not come into the hospital.  Subsequently Fr Michael got slowly better and as he was coming out of his induced coma, I was asked again by the staff to say some prayers and as I was praying (again via Facetime) I saw a little smile on his face. Again I had no knowledge as to whether he heard those prayers or not.

“Slowly but surely Fr Michael’s health improved and he was transferred to a ward where I could go and have a face-to-face conversation and we reflected together on his journey through Covid-19 and through the hospital.

“Covid-19 was horrible in many respects for chaplaincy and for the staff on Critical Care and the wider NHS, especially at the height of the first wave,” said Rev Lee. “ But meeting Fr Michael, both through Facetime and face-to-face was one of my own highlights of the year.”

Fr Michael is now back on form – still with his sense of humour intact – and he has already been back to visit the critical care ward at Queen Elizabeth’s where he met other survivors. He is also working on a new edition of his book and adding a chapter about his own experience.

Article extracts from The Sower magazine

Pictured above is Fr Michael Stack. Picture by Con McHugh.