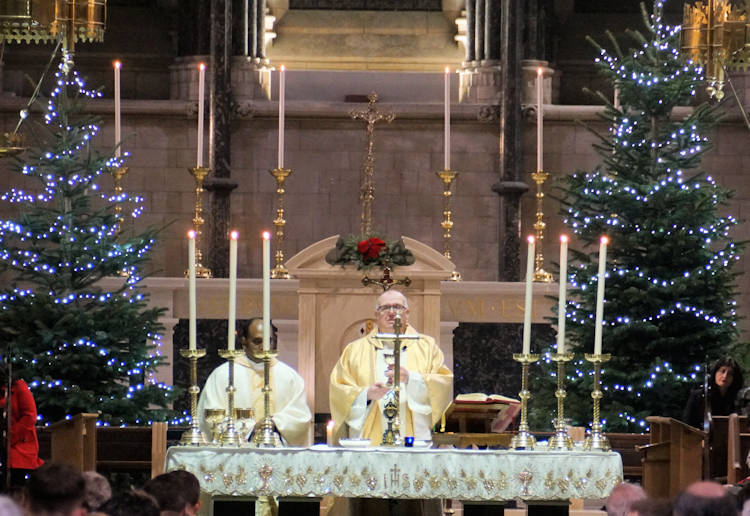 St John’s Cathedral in Norwich welcomed around 1800 socially-distanced worshippers over its 17 Christmas Masses and many more via its live-stream and on Radio Maria after some emergency work on its sound system, which completely failed on Christmas Eve.

The entire Cathedral in-house and live-stream sound went down at 11am on Christmas Eve and Director of Music Daniel Justin turned to the Cathedral’s sound engineer, Darren Butler of Audio Electronic Design for help.

Daniel said: “Darren was a saviour on Christmas Eve, replacing the faulty item at very short notice. He drove from a job he was doing in London and had our system replaced and fully functioning within six hours, and just in time for the 6pm Mass, which allowed us to also live-stream the Mass (which has reached an online audience of over 600), and broadcast it over Radio Maria.”

Darren said: “It was worse-case scenario as the main digital desk had failed. This is the heart of any sound system and affects every aspect of it.

“As a business, we keep spare major parts for all our systems, especially the larger ones. We also have a total independent system in a state of readiness just in case we can’t fix in a short space of time.

Cathedral Dean, Canon David Paul, said: ‘It was a great joy to welcome so many people to the Cathedral over Christmas this year. Although we were limited by numbers, over 1800 people were able to attend one of the 17 Masses on Christmas Eve and Christmas Day.

“In spite of the limitations, there was a real sense of thanksgiving that our Christmas celebrations were able to go ahead. The crib scene was even more special this year, and the image of the Holy Family was a great comfort to those spending Christmas alone.”

You can view Masses at St John’s on its YouTube channel.

Pictured above is a Christmas Mass from 2019 at St John’s Cathedral in Norwich.