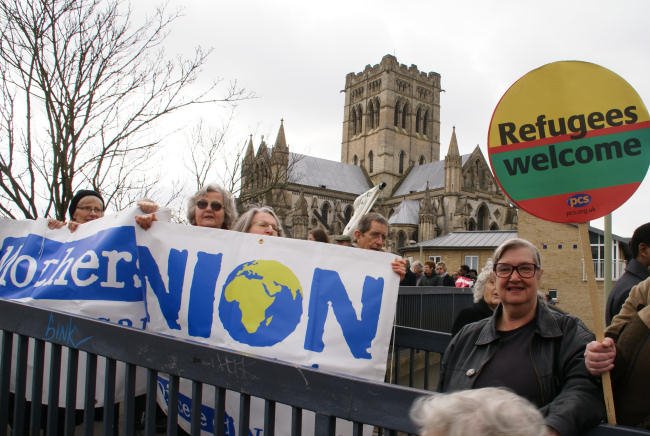 A multi-faith Palm Sunday march across Norwich city centre, which began at St John the Baptist Catholic Cathedral, has repeated calls on Norfolk County Council to fulfil its pledge to welcome 50 Syrian refugee families to the city as soon as possible, echoing a plea from Pope Francis.

The 120-strong march, organised by Sanctuary Norfolk and the Mothers’ Union (Norwich Diocese), began at the Catholic Cathedral, where Dean the Very Revd David Provost Paul, said: “Today is Palm Sunday when we remember the Lord’s welcome into Jerusalem. For people of all faiths, we believe God’s welcomes us all into his life and we want to extend that to those who are in great need. For Syrian refugees that need is more desperate than ever.

“We bear witness to the welcome God wants us to extend to those who have been made homeless, who have fled wars and persecutions. We will be joining together in prayer for the situation and also to ask those in authority to be open and generous and to welcome those who want to come to Norwich to be part of our family here.”

Clergy and Christians from several Norwich churches joined others in the March 20 procession to St Peter Mancroft where various speakers addressed the crowd. 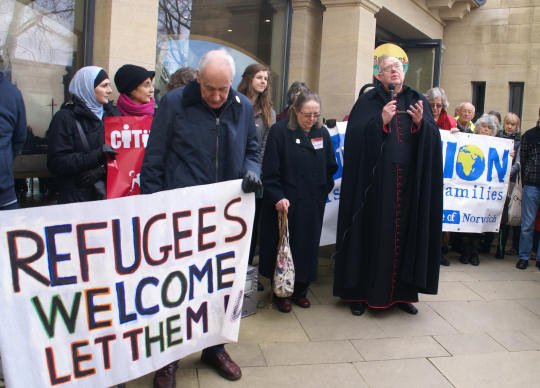 Marguerite Phillips, President of the Mothers’ Union, Norwich Diocese, said: “We need a response from Norfolk County Council on when something might happen. We believe that this support for refugees is a basic humanitarian response and as Mothers Union members we see it as our obligation to help those in desperate need. Let’s hope the County Council are moved by the response today.”

Anas Injarie, a Syrian doctor, working as an eye specialist at the Norfolk and Norwich University Hospital said: “What is happening in Syria is beyond imagination. Right now we have people on our doorstep, calling on our humanity. What are we if we do not help them and open our doors to the women and children who are suffering. What are we in Norwich if we do not allow just 50 ‘ are we not ashamed to even say that number. This is the moment when our true humanity should prevail ‘ all we need is love.”

Meanwhile, Pope Francis condemned those who ignore the plight of refugees, in his homily at Palm Sunday mass in Rome.

Speaking in St Peter’s Square before tens of thousands of people, the Pope said he was thinking of those fleeing war: “I am thinking of so many other people, so many marginalised people, so many asylum seekers, so many refugees. There are so many who don’t want to take responsibility for their destiny,” he said.

Pictured top, the procession near Norwich Catholic Cathedral and, above, theVery Revd David Provost Pauladdresses the start of the march.