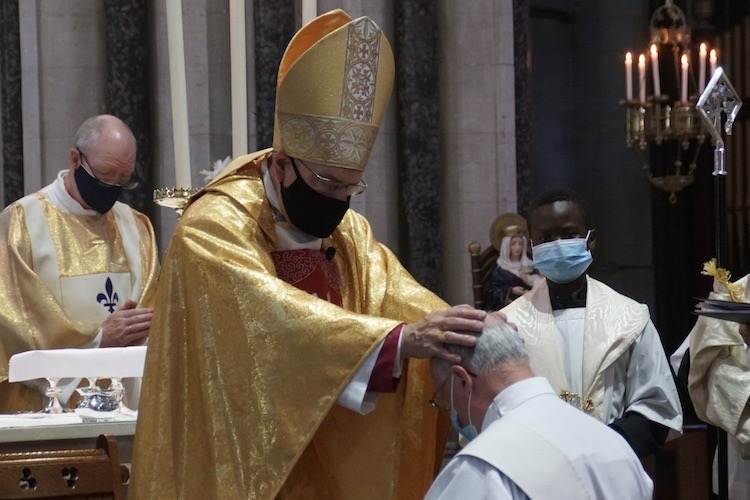 As he ordained Andrew Neate to the priesthood on Saturday, Bishop Alan encouraged him to mould his life on the mystery of the Lord’s presence.

Fr Neate said: “I feel very lucky to be fit and active to take on further ministry as an ordained priest. So much of my past life has led me on to this. I greatly look forward to serving our Catholic Parish in Fakenham.”

In his homily, Bishop Alan said: “Jesus chooses men and sets them apart to share in His priesthood…He says to us very clearly, ‘You did not choose me; I chose you.’ So with you, Andrew. He has called you for His own purposes.”

Bishop Alan emphasised the importance of the people of God in supporting a priestly ministry. “No priest could continue his ministry if it were not for the people of God…which supports a priest through times of discouragement.” And he added: “The whole Church in heaven and on earth is wrapping you in a mantle of prayer.”

He encouraged Fr Neate to “imitate the mystery you celebrate – mould your life on the mystery of the Lord’s presence.”

Andrew Neate has been serving as a Permanent Deacon in the parish of Cromer and Sheringham in Norfolk. He had left his banking career early and was able, when ordained in 1996, to offer a full-time commitment to the Diaconate ministry.

Following a time in parish ministry in Huntingdon, he served for 17 years as a chaplain at Addenbrookes Hospital in Cambridge, being attached to Our Lady and the English Martyrs.

He was married for 50 years to Margaret and was widowed three years ago.   Bishop Alan, after recognising his vocation to the priesthood, asked him to undertake some studies at Allen Hall to prepare for ordination. His late wife’s family are descended from St Thomas More, and as the Seminary is on the site of More’s Chelsea House, it seemed fitting that he should study there.

He had been was brought up in a Methodist household, living in south-east London. He left school at sixteen and worked for an American company in central London, specialising in Personnel Relations. At the same time, he joined an Ecumenical Community, The Bede House Association, founded by Clare College, Cambridge. Originally founded to help the deprived dockers of Bermondsey, it had come to focus on young people. There he was influenced by many Anglican and Catholic Clergy and subsequently decided to embrace the Catholic Faith

He was for ten years director of the Diocesan Pilgrimage to Lourdes, using hospital contacts to build up the nursing help for assisted pilgrims. Lourdes has always been a deeply enriching place for him and important for his spiritual journey. In Cromer he has been active in the parish while also needing time for his wife’s care. In this he has been grateful for much support and prayer from the parish.

You can see a Flickr gallery of the ordination by clicking on the link below. 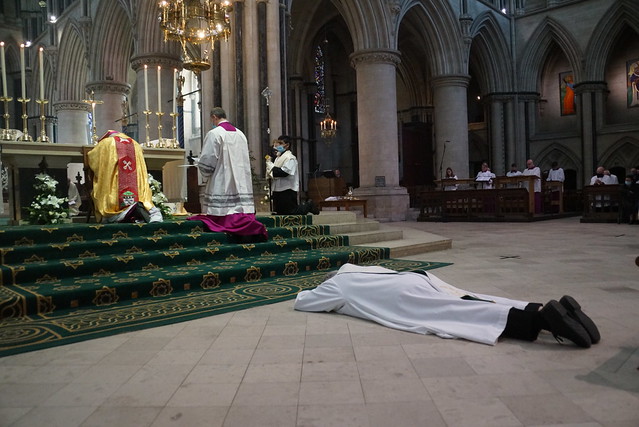