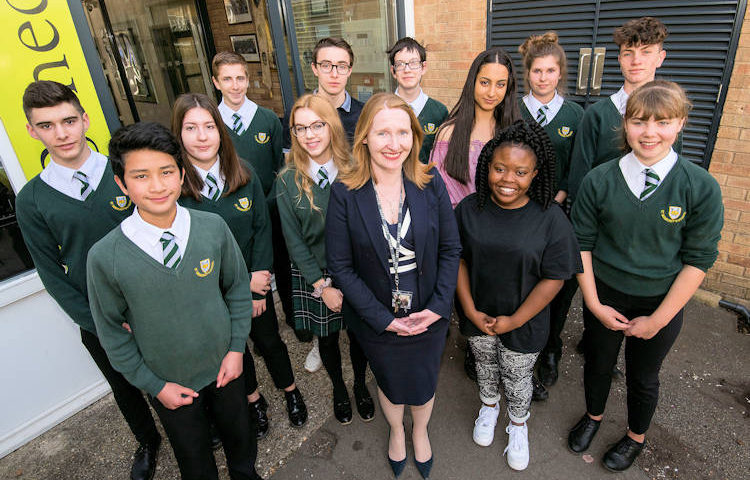 St Benedict’s Catholic School in Bury St Edmunds has welcomed a new headteacher who will see the school transition from two sites to operate on a single site.

Imogen Senior has taken over from Kate Pereira as headteacher of the school. Kate has just been appointed as headteacher at St John Fisher High School in Peterborough.

Kate had been in the role for just over two and a half years and she succeeded Hugh O’Neill after he retired from working at the school for 33 years.

Imogen said: “It’s very exciting, the school is a lovely place to be.”

She was promoted from the role of head of sixth form which is currently rated ‘Outstanding’ by Ofsted, whilst the school overall was rated ‘Good’ in its last inspection in 2016.

She has been in education since 2001 and has worked at St Benedict’s since September after previously working as head of sixth form at the Samuel Ward Academy in Haverhill.

“I love it, it’s fantastic,” she said about the school and teaching. “I want to carry on the fantastic work that’s been started here. Supporting our students achieving the very best academically and personally.”

She added: “The move to the one site enables us to come together as a community which we currently struggle to do across the two sites.”

“I think the school has gone through significant changes already I would like to continue what we do very well, for example continuing to build on the sixth form,” Imogen said, “we want to support all of our students. I am interested in making improvements, not massive changes.”

Imogen also said she would like to enhance and carry on the charity work that the school and students are currently very involved with.

The school will be operating solely on the Beetons Way site from September. As part of the closure of the lower school site in St Andrew’s Street South the school is holding a special mass and picnic on June 29. Anyone connected with the school or interested in attending can call 01284 753512.

Pictured above is Imogen Senior with pupils at St Benedict’s. Picture by Mark Westley. Picture and article extracts courtesy of buryfreepress.co.uk