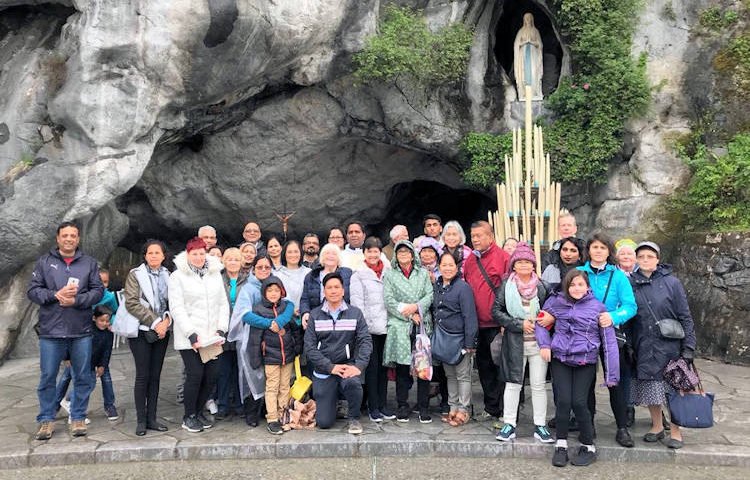 A group of 38 people from the Cathedral of St John the Baptist in Norwich recently took part in a three-day pilgrimage to Lourdes. Dr Martin Auger reports.

On April 25, a diverse group of 38 pilgrims received a blessing from Provost David Paul in Norwich before starting their journey to Lourdes.

Organised and led by Fr Arockiya Seelan the group included the young and not-so-young, the physically less able and physically able, women and men, families and individuals from a range of countries of origin, altar servers, stewards, catechists, reader and all with their individual reasons for going. For some it was a first visit to Lourdes, for others a return.

Lourdes itself provides an affirmation that the frail, the sick and the disabled enjoy a special place in God’s heart.

After a coach journey and flight from Stansted, we checked into our hotel, had dinner and then joined the nightly Torchlight Procession and Rosary. It is led by a statue of the Virgin Mary carried by volunteers and begins near the Massabielle Grotto, continues around the esplanade and ends in the Rosary Square.

Most participants carry a candle and the Rosary is introduced in several languages and the Ave Maria and Our Father said in each individual’s native language, giving a real sense of the universal nature of the Church and our common humanity.

At the conclusion we were invited to exchange the sign of peace with those around us. The Torchlight Procession and Rosary is a very moving event and was instituted in 1863 to mark Our Lady’s Apparitions in Lourdes to the poor, uneducated, guileless young woman Bernadette Soubirous, who was only 14 years old at the time, but open to God. There were 18 Apparitions in total and Bernadette and others usually visited the site at Massabielle carrying candles in procession.

On Thursday we walked together to participate in a Mass celebrated by Fr Seelan at the Massabielle Grotto, where Bernadette knelt before the apparition of Our Lady. Fr Seelan’s homily was based on the account of the Wedding at Cana in St John’s Gospel and Mary’s instructions to Do whatever He tells you – the Lourdes theme for 2018.

That afternoon, Fr Seelan had arranged a guided tour in Bernadette’s Footsteps allowing us to learn more about Bernadette’s early family life. Our tour guide was Sr Anne who encouraged us all to proclaim God is love and He loves me as I am a powerful and affirming message whoever we are and whatever our situation in life.

Later there was an opportunity to take part in the Eucharistic Procession back over the River Gave to the vast underground Basilica of Saint Pius X, with its stunning stained glass windows. There is a time for adoration and then blessing of the sick.

On our last day we went to a private Mass in St Anne’s Chapel in the Immaculate Conception Basilica, celebrated by Fr Seelan during which he preached about the importance and significance of grandparents and parents in a child’s formation in faith. Prayers and intercessions were made for our group, the dead, the sick and for personal intentions.

As the weather had improved, Fr Seelan then led a small group in the Way of the Cross, which follows a hilly, winding and rugged path, with each station made up of two metre high cast iron figures (115 figures in total). At the first station (Jesus is condemned to death) we were invited to silently climb a short, but steep series of stone steps on our knees up to the station. Arriving at the top of the steps to meet the figure of Christ surrounded by Roman soldiers was a humbling and profoundly moving experience, preparing us to engage more deeply in the subsequent meditations at the end of our visit.

Pictured above are St Johna’s pilgrims at the Massabielle Grotto in Lourdes.