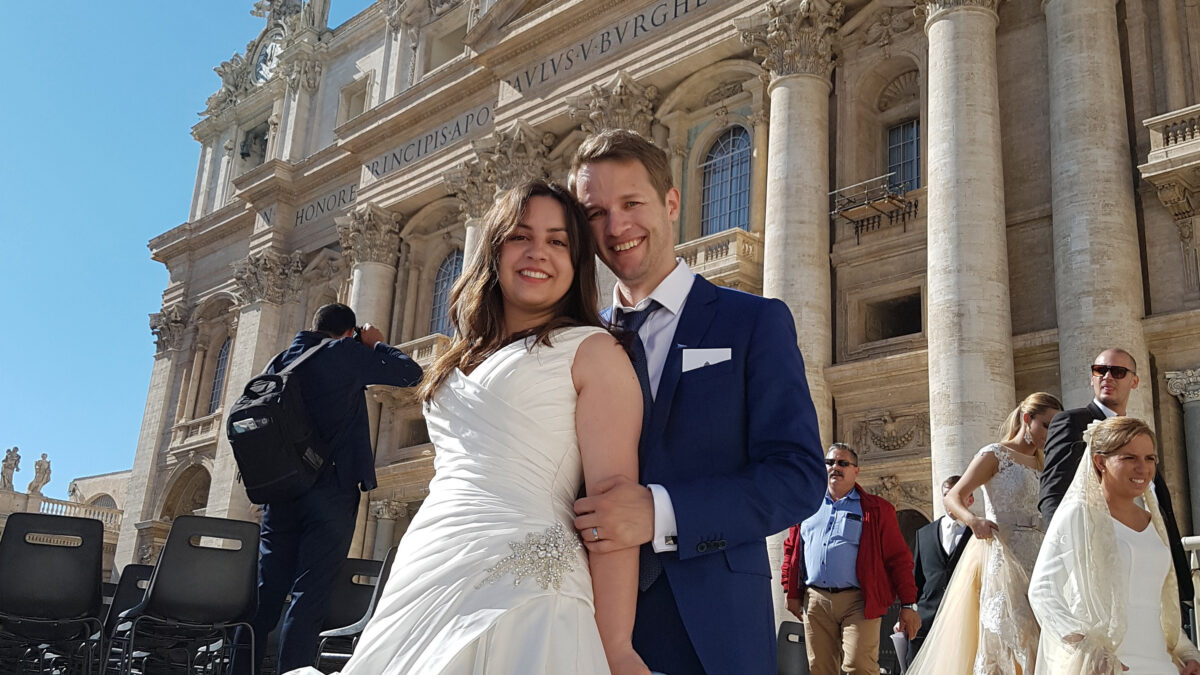 With a Mass for those affected by infertility being held in Newmarket in November, Lucy from East Anglia tells her own story of ‘unexplained infertility’ and how a Catholic alternative helped her.

In 2017, I was 31 and it was a very exciting year for me, I got engaged and married. My husband isn’t a Catholic but is Christian. From early on in our engagement I told him about the Catholic Church’s Natural Family Planning (NFP) courses and he was fully on board completing them with me. We learnt the Sympto-Thermal method of NFP. Feeling very confident with this cycle tracking, I thought that when the time came to get pregnant it would be easy – after all I’d know when my ovulation day would be every month.

Within a few months of getting married, I wasn’t well. I had to go to A&E and was diagnosed with an autoimmune disease type one diabetes and told I shouldn’t get pregnant until my blood sugar came down. Three months later, after 100% dedication to tight blood sugar control, I was given the all-clear that it was safe to get pregnant.

Months and months went past without me getting pregnant. I was told by my GP it was probably stress that was making me unable to get pregnant. This progressed to dozens of migraines per month. I had a bunch of blood tests done, and referrals and investigations from one specialist to another.

Two years into trying to get pregnant, my symptoms got more intense and affected my ability to even leave my house. We’d ruled out my husband having any fertility issues. Around this time, I told my GP I needed a referral for endometriosis investigations. I said I had every symptom. Scans came back fine, and the gynaecologist convinced me I didn’t have endometriosis. Various other doctors also couldn’t find the reasons behind my symptoms.

Fortunately, several Catholic friends, one in particular who I have known for many years, a former GP, suggested I look into NaProTechnology. NaProTechnology stands for Natural Reproductive Technology which is a medical route which uses the NFP method called the Creighton model. This was developed by the Catholic church, with the goal of understanding the root cause of symptoms relating to gynaecological and fertility issues through cycle tracking with a very detailed symptoms analysis. My husband and I booked an appointment with the NaProTechnology practitioner. It was such a delight, what a lovely and knowledgeable lady we met with!

Meanwhile we also stuck with the traditional medicine route. By now I’d also been advised to eliminate so many foods by doctors as they thought my symptoms might be related to food intolerances or sensitivities. Three years into trying to get pregnant, a second gynaecologist diagnosed us with ‘unexplained infertility’ and offered us free IVF, which we declined.

Meanwhile, several months of cycle charting with the Creighton Method indicated I had a possible three issues:

The NaProTechnology practitioner also referred us also to a NaProTechnology gynaecologist (this being the third gynaecologist I’d now see). I had a few extra scans, ones very particular to NaProTechnology, which showed another potential issue (issue #4) relating to ovulating with an immature egg. I booked into a laparoscopy (keyhole surgery) to check if I had endometriosis, which confirmed I did at an advantaged stage. My surgeon told me that in 20% of cases it doesn’t show on a scan even in severe cases like mine. The surgeon also did another procedure called a hysteroscopy where he found I have a uterus issue called a uterine septum where I would need another surgery (issue #5).

I feel so fortunate to be Catholic: my faith saved me from infertility and serious complex bowel issues arising from endometriosis, which could have led to lifelong permanent issues. After being told I had ‘unexplained infertility’ by traditional doctors and being asked if I wanted to pursue the IVF route, I felt very disappointed. With my beliefs, IVF has never been an option for me. Knowing now the issues I have, I realise IVF likely wouldn’t have even worked for me.

Endometriosis, low hormone levels and a uterine septum are all reasons that can cause miscarriages. I am so impressed with the NaProTechnology specialists’ knowledge and finding five issues affecting my health, all of which can be fixed. I feel truly blessed to have discovered the reasons why I had so much debilitating pain for years and why I haven’t yet been able to get pregnant. The surgeon said to us there is definitely no ‘unexplained infertility’ in our case. There are very clear reasons why we’ve not been able to get pregnant yet and these certainly explain many of my other symptoms.

I am really looking forward to 2022. I think it will be a great year with less pain, fewer symptoms and after over three years of hoping for a baby we may have one. We will continue praying and hope God will bless us with a baby soon.

Editor’s note: Dr Phil Boyle, the founder of NeoFertility, will be speaking at St Etheldreda’s in Newmarket at 11am on Saturday November 6; you can get more information from Dr Jess Beckett, Diocesan Fertility Awareness Methods Coordinator, on famc.eastanglia@rcdea.org.uk. Dr Beckett spoke recently on Radio Maria about the importance of supporting couples experiencing infertility. You can listen to the programme here.

Pictured above is Lucy with her husband at St Peter’s in Rome, where the Pope blessed their marriage.