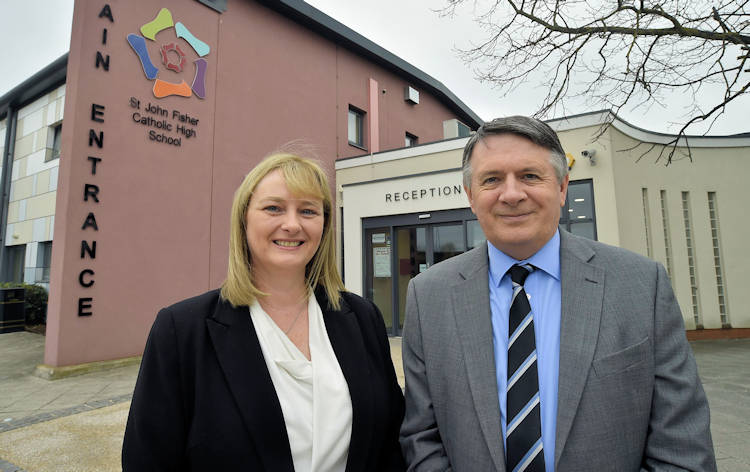 Following the retirement of headteacher Sean Hayes after more than ten years, Kate Pereira is set to take over the role at St John Fisher Catholic High School in Peterborough later this month.

Sean came to the school in July 2008 when it had just gone into special measures and the governors had been replaced.  Under his leadership it came out of special measure in March 2010 and was judged good in October 2013 and again in November 2017.

A diocesan inspection of December 2013 said the school was outstanding. Results last year showing pupil progress at GCSE level was above the national average.

Kate was assistant head at the school for eight years until 2015. She then went to St Thomas More in Bedford as deputy head, followed by St Benedict’s in Bury St Edmunds as head.

She said: “St John Fisher has been on a journey of significant improvement over the ten years under the strong leadership of Sean.

“Having worked closely with him, I feel privileged and immensely proud to be taking over the leadership of such a wonderful school. St John Fisher is very special and in many ways a unique school.

“I am delighted to be returning after four years in two other Catholic schools as deputy head and head. What I love is the family feel of St John Fisher because of its small size and the way everybody is known well.

“I am particularly looking forward to getting to know staff, students, parents and governors over the course of my first half term, some of whom I already know from my previous time at St John Fisher.

“I am also looking forward to working with the talented, dedicated staff body to establish our next steps for the school in order to take St John Fisher on into the future.”

Pictured above are Sean Hayes and Kate Pereira outside St John Fisher Catholic High School in Peterborough. Picture and article extracts from www.peterboroughtoday.co.uk