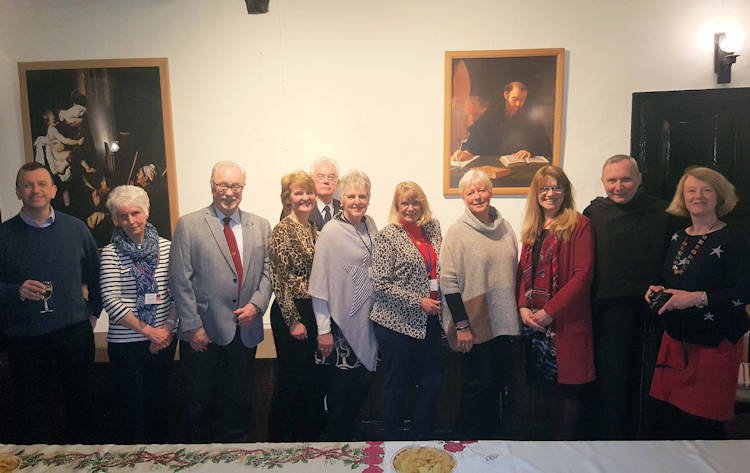 Charities have received over £10,000 in donations thanks to the annual Clare Priory Craft Fair in July, which brings together over 200 exhibitors of traditional and contemporary crafts in the grounds of the Suffolk priory.

The fair attracted over 10, 000 visitors in 2017 and all proceeds are donated to local, national and international charities.

On March 23 recipients of donations from the 2017 Craft Fair gathered over wine, biscuits and cheese at Clare Priory to receive their awards from Prior Fr Stefan Park. Representatives from organisations including the Priory’s Augustinian Order, East Anglia Children’s Hospice, Clare Seekers and Catholic international aid agency CAFOD enjoyed meeting each other and talking about their work.

Craft Fair committee member, Robin Hughes, said: What a great evening. It was so good to meet volunteers and charity workers, hear about their work and present them with their awards.

Jane Crone, Community Participation Coordinator for CAFOD in the Diocese East Anglia, expressed her thanks, saying: It was a real pleasure to meet the Craft Fair committee and volunteers from so many wonderful charities. CAFOD is enormously grateful for the generous donation to our Lent appeal.

All donations up to 5 million given to CAFOD’s Lent Appeal before May 12 will be doubled by the UK government thanks to match funding. So this donation will make double the difference to our partners working in countries such as Zimbabwe and Eritrea in their work for justice and an end to poverty.