A time to evangelise: Jesus is bigger than Corona

Could prayers to St Edmund help end the pandemic? 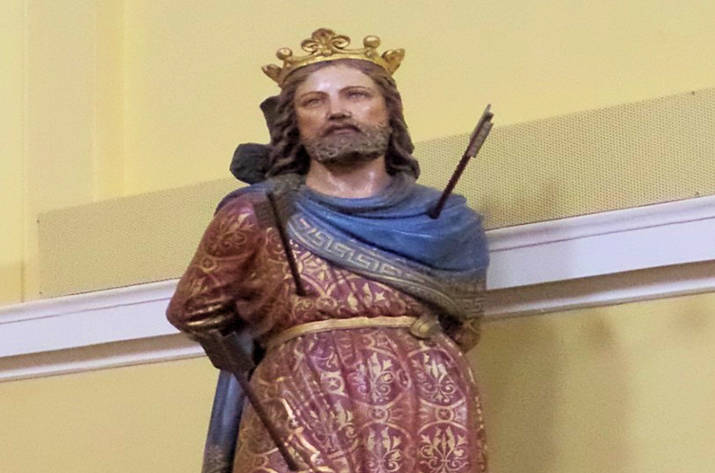 Local historian and member of St Edmund’s Church in Bury St Edmunds, John Saunders, explores the story of Saint Edmund, the true whereabouts of his remains and whether he could be invoked to play a part in delivering us from the current pandemic.

Inhabitants of Bury St Edmunds will be familiar with the story of Edmund who, at the age of 14 years was crowned King of East Anglia in the year 855.  Speculation has always existed as to the place of his martyrdom at the hands of the Danes and although the most reliable theory is now Bradfield, it has varied between Hoxne and locations in Norfolk and Essex.

Equally his places of burial and resting have for centuries exercised the minds of historians and theologians many of them claiming their findings to be factually accurate.  Indeed, the question, “Where is St Edmund?” lingers on the lips of many who are curious to find his remains for reasons that fuel spirituality or have archaeological, touristic or economic interest.

There is a degree of certainty that in the 11th century the body of St Edmund was entombed in a small rotunda church within what we know as the Abbey Grounds, Bury St Edmunds.  The building of the Abbey commenced during that century, leading to the creation within the Abbey Church of a massive shrine that contained St Edmund’s body which attracted pilgrims from across Europe.  His body was asserted to be incorrupt; he was patron Saint of England until 1348; miracles were claimed to have occurred through his intercession; his reputation in life and in death was significant to those who believed or who doubted.

Stories exist of how the deceased Edmund was not a Saint to be upset.  Allegedly, King Sweyn devastated Edmund’s possessions resulting in the Saint appearing to him in a vision and striking him on the head, a blow from which Sweyn died.

Abbot Leofstan decided to test the incorrupt state of Edmund and engaged with another monk in trying to pull apart the head from its body.  Leofstan was immediately paralysed and sensorily impaired.

The Benedictine monks at the Abbey revered their Saint and repelled attempts by the Bishop of Elmham to relocate his bishopric to Bury St Edmunds which would have meant a downgrading of the status of their community.  During the course of this Abbot Baldwin went to Rome to seek the Pope’s intervention leaving a relic of St Edmund at Lucca Cathedral in Italy.  The nature of the relic (it may have been material that had come into contact with the Saint rather than a physical part of his body) and whether it remains is not known.

The last known occasion when Edmund’s body was examined was following a major fire in the Abbey Church in 1198 when Abbot Samson, in the presence of witnesses, found it intact and incorrupt.

A conundrum in history, often debunked by contemporary historians, arises from the claim that the relics of St Edmund were removed by King Louis VIII in 1216/1217 from Bury St Edmunds to Toulouse and were subsequently venerated there in the Cathedral of St Sernin.  There was also the disputed theory of Sir Ernest Clarke that Edmund’s body perished in a fire in 1465.

Until the dissolution of the Abbey in Bury St Edmunds in 1539 pilgrims were venerating his shrine in Bury St Edmunds in the belief that his relics remained there.  Some of his relics may well have been also placed and venerated in the cathedral of St Sernin. In effect St Edmund was being venerated in two places at once. No mention was made of his body when the Commissioners of King Henry VIII made their assessment of St Edmund’s Abbey. They merely note that it was a ‘rich shrine which was cumbrous to deface’ and they took possession of various incidental items. Perhaps, as with other Shrines in the land, the relics had already been re-buried in a safe place with the hope that they would be restored after the religious upheaval was over.

However, the subsequent records at Toulouse specify ‘… at the chapel and in front of the altar, where the body of Saint Edmond (sic), Martyr, King of England, is enthroned in a casket donated by the City of Toulouse in August in the year 1631 for it to be released from the plague by the intercession of said Saint… on November 13th, 1644…. all the relics were exposed on a large altar which was erected at the end of the nave of the said Church, and on the 20th of that month of November of the same year a general procession was made in which all the said relics were carried in forty-two pavilions: all the religious orders of the city were also seated there’.  The significance of this piece is that between 1628 and 1631 the people of Toulouse suffered a great plague – it was believed that their faith in praying to St Edmund whose relics were within their Cathedral brought the plague to an end.  The citizens kept their promise to St Edmund to translate his remains to a silver shrine.  This matter is also recorded in different places in records maintained by the Jesuit priests who served Bury St Edmunds.

The Gentlemen’s Magazine 1848 mentions that wood from the oak at Hoxne, allegedly the tree to which St Edmund was tied, had been used to create an alms box within St Edmund’s Church, Bury St Edmunds.  This relic was exhibited at a meeting of the Royal Archaeological Institute at Bury St Edmunds in 1869 through the courtesy of Sir Edward Kerrison Bart who subsequently donated it in 1878 to the Catholic Church courtesy of a parishioner Mrs Milner Gibson.  It remains within the Church.

Around the years 1877/78 the profile of St Edmund peaked at the Catholic Church in Bury St Edmunds and it benefited from generous gifts including a copy of the de la Fosse painting of the martyrdom, symbolic altar cloths, vestments and banners. The (pictured) statue donated by Mrs Milner Gibson remains.

The question needs to be asked: ‘Were the clergy, parishioners and the likes of Mrs Milner Gibson and Sir Edward Kerrison (Baronet and MP) deceived or is there credibility in this history’?

The Jesuits also identified a further relationship with Toulouse.  Although a full account is given in their records, in summary this refers to a relic of St Edmund: ‘The Cardinal Archbishop of Toulouse gave it to Miss Forbes Leith for Mrs Milner Gibson in a box sealed by him.  Bishop Arthur Riddell took the relic from this box and duly authenticated it in November 1881 so that it was in time to be exposed for St Edmund’s feast November 20 of that year’.  This happening is referred to in the Bury and Norwich Post on 22 November 1881 when reporting the celebration of St Edmund’s Day.  It would appear that this relic was a piece of bone from St Edmund but its disappearance has never been accounted for.

The diaries of the Jesuits arouse further interest: ‘The local outbreak of influenza was such that on 9 January 1892 a soup kitchen was started, a situation which escalated during the following month’. In 1895 two local priests, Fr Jones and Fr Perrin, made a pilgrimage to the reputed place of the martyrdom of St Edmund at Hoxne.  They repeated this journey in 1899.

However, it is the following entry written by the Jesuits that is apposite to our modern day: ‘On 7 January 1902 “a casual” coming to the town brought smallpox to the town.  About 14 contracted it and about 6 died.  Fr Jones had much difficulty in procuring permission to visit Catholics who had contracted the disease.  Permission was granted by the Sanitary Committee for him to do so but he was in danger of death’.

It further states that on 9 March 1902 a relic of St Edmund was (privately) carried by Fr Jones through the main street of the town from which he was inclined to believe that no further reported cases of smallpox occurred in Bury St Edmunds.

Whilst the origin of that relic cannot be categorically stated, it may be that this resulted from a request made in 1901 for some of the relics of St Edmund to be transferred from Toulouse via Rome to England with the intention of them being deposited in Westminster Cathedral which was then being built.  An assortment of bones was provided but following lengthy media debate these were discredited because they were a mix of male and female bones and it was conceded that they could not have been those of the Saint.  These bones remain at Arundel in the custody of the Duke of Norfolk.  There is the possibility that part of this collection temporarily came into the possession of Fr Jones in 1902 on which the foregoing story is based.

A theory which appears to have escaped many who dismiss the veracity of these bones is that the Cathedral of St Sernin had relics of many Saints.  At the time of the French Revolutions of the 18th and 19th centuries it is contended that various relics were hurriedly removed for safe keeping which could well account for why the bones comprised a mix.

The next epoch in the history of the relics of St Edmund occurred when a local priest Fr Bryan Houghton managed to obtain two teeth from the relics of St Edmund retained in Toulouse – these were installed at the St Edmund’s Day Mass on 20 November 1969 (Fr Houghton originally claimed that the relics comprised three teeth, an error he corrected in a letter in 1987).  However, upon the sale of the altar in 2013 there was no trace of the relics although Fr Houghton had previously indicated that he had sent them to Douai.  Many sceptics dismissed the work and writings of Fr Houghton as without foundation but the study of the Saint by an intelligent and articulate scholar was impressive to many. 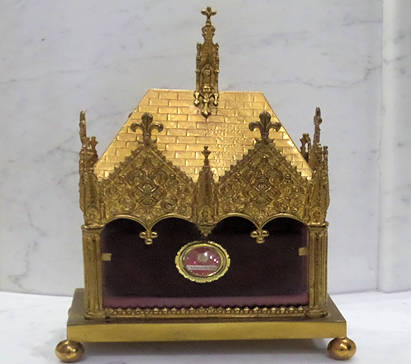 In 2014 Fr Mark Hackeson became the priest in charge of St Edmund’s Church, Bury St Edmunds.  He brought with him a relic (Pictured right) of a small fragment of bone of St Edmund which had been privately given to him in 2006 in Rome and was accompanied by written authentication.  Through his generosity the relic remains locally and is exposed on the Saint’s feast day.

So where does this leave us?  The truth must be that no one knows for certain where the body of St Edmund lies but events of the past may send a note of caution as to the reasons for wanting to find his body and how this should be undertaken.  The intentions to stage celebrations to commemorate 1000 years since King Cnut determined a resting place for Edmund have now been disrupted by Covid-19 but he is one is one of several Saints (including Sebastian, Roch, Giles and Rosalia) recognised as intercessors at the time of plague.

As many of us sit in isolation, we might do well to invoke Saint Edmund to play a part in delivering us from the current pandemic.  We might also stretch our thinking as to whether any promises we might make to Edmund will match those of Toulouse in 1644.

Join votive mass of St Edmund on May 6

On Wednesday May 6, St Edmunds church will celebrate a Votive Mass of St Edmund, one of the saints to pray to in the time of a pandemic.  The parish relic of St Edmund will be placed on the altar that day.  All are welcome to join in the time of prayer and Mass, which begins at 10am and will be live streamed on the church YouTube channel. 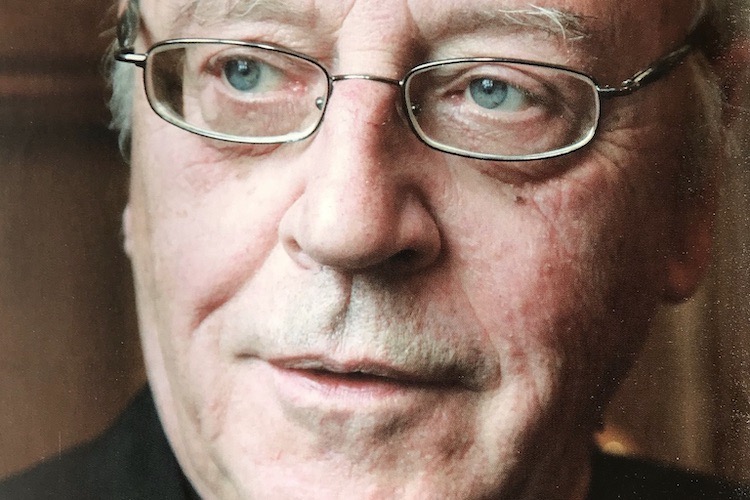 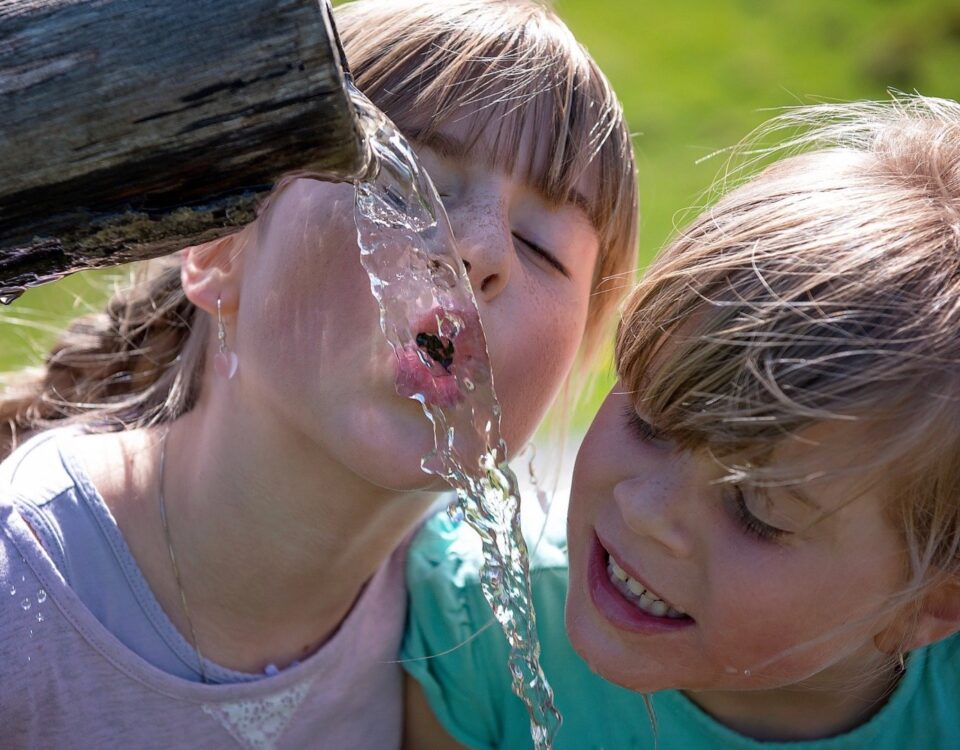