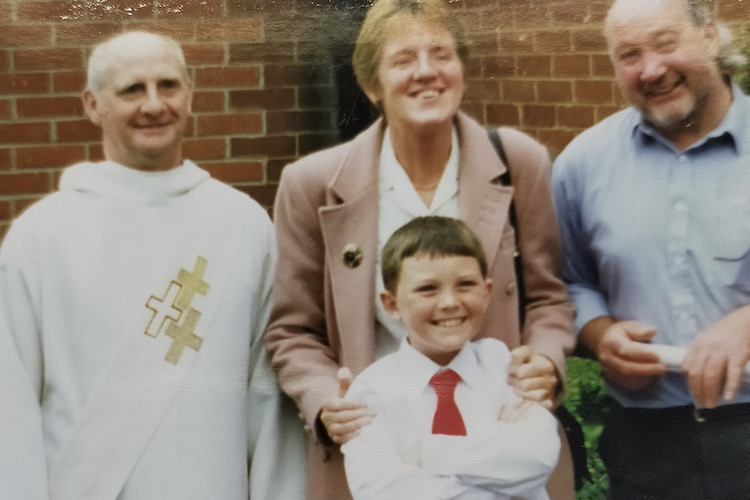 Chris Heath, who served for twenty-four years as a Deacon in the Diocese, passed away just before Holy Week. John Morrill writes an appreciation of his ministry.

Deacon Chris Heath was ordained as a permanent deacon for the diocese of East Anglia on the Feast of SS Peter and Paul 1996, one of eight men ordained by Bishop Peter Smith that day. Bishop Peter took them aside one by one and told them that their first vocation was to their wives and children, their second vocation was in jobs that had in the community and that the Church would gratefully accept what was left over. This was very much how Chris saw his calling.

His life with his wife Eilish was very much a partnership in prayer and service and indeed I was not alone of thinking not of Chris and Eilish but ChrisEilish, without a hyphen. He was deeply committed to his children and more recently grandchildren. He had a career with the Inland Revenue (as it was then, now HMRC), and then as a kind of gamekeeper-turned-poacher, he helped people with their tax affairs, most notably a good many of the clergy. Indeed, it was life with the Inland Revenue that had him moving round the country until the family came to Bury St Edmunds in the 1970s, which is where he spent his last fifty years.

Chris was from a large Catholic family – the youngest of eight – and a devout family (two of his five brothers were priests, one of them, Bernard, also serving in East Anglia, and his brother Jim a deacon also, and Eilish came baptised in the holy waters of Ireland). Chris was active in the life of St Edmund’s parish from the moment they arrived and his calling to the diaconate was nurtured especially by Fr John Drury when he was parish priest, with his deep pastoral approach and commitment to collaborative ministry, and to working with other Christians. All these became an important part of Chris’s witness.

He and Eilish helped to develop the prayer life of the parish and led days of prayer and recollection as part of the ministry of Sr Kathleen O’Sullivan during her years in the convent of the sisters of St Louis in Newmarket.  For many years they continued in this work, especially in an ecumenical retreat house at Wenhaston, near Southwold. When he was in formation, Chris began a prayer group for the six men based in Cambridgeshire and West Suffolk which met monthly in the homes of each of them in turn and had a profound effect on the lives of all of them in their ministries.

He was very much at peace in his relationship with God, but he was often very restless in his relationship with the world (and even with the Church) and he felt, perhaps more than he needed to, hemmed in by rules and regulations. But there was about him a generosity of spirit, a love and respect for all, that made him an outstanding companion to those families he worked with in preparation for baptisms, weddings and funerals. Alongside this work and his support for the outreach activities of the parish, his main ministry was (again alongside Eilish) in West Suffolk Hospital where he brought peace and understanding to the sick and the dying. Theirs was also a notable ecumenical ministry and they were key members of a team of more than 70 chaplains and volunteers.

In the last years of his life, he suffered from dementia and just before Covid lockdown, he moved into a care-home near Stowmarket. Chris died after a short final illness in West Suffolk Hospital just before Holy Week, and his Requiem Mass for his family and close friends was held in the parish church he loved at the end of Easter Week. There is something splendid about experiencing death and the hope of Resurrection framed by Holy Week. But alas it means that the planned silver jubilee mass to be celebrated on 29 June in his care home, alongside the other five still-living confreres ordained with him in 1996 cannot now take place.

At his ordination, Bishop Peter Smith handed him the book of the gospels and said: “Chris, receive the Gospel of Christ whose herald you now are: believe what you read, teach what you believe, and practice what you teach.” And in a new way, with sacred visibility, that is what he did, with humility and faith, for twenty-four years and nine months. May he rest in peace and rise in glory.