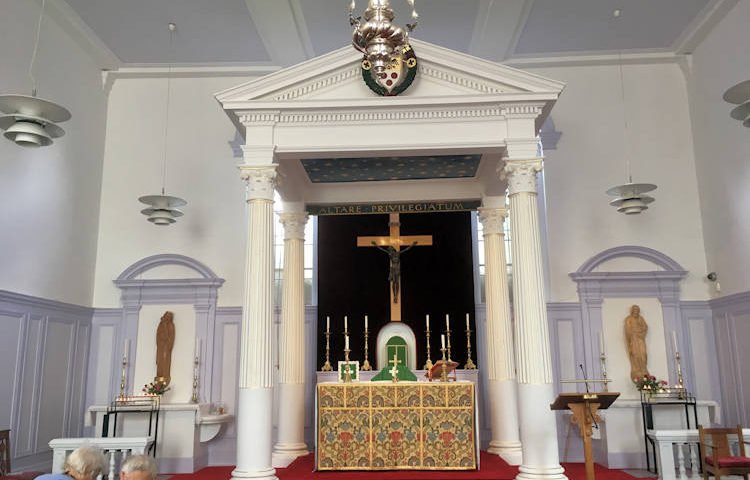 The completion of a £67,000 project to repair and redecorate St Thomas of Canterbury church, Woodbridge, has been celebrated by parishioners, reports Parish Publicity Officer Kathleen Coates.

A thank you card from parishioners was presented to Fr Edmund Eggleston when Mass was celebrated at St Thomas of Canterbury during the last weekend of July. Parishioners expressed their delight at the work which had been done on the church to get rid of the damp and ugly mould. It was then redecorated including the addition of stars above the altar. The church looks and smells clean. An extensive programme of repairs outside the building had been completed earlier this year, before the interior of the church was repaired and redecorated.

Father Edmund Eggleston planned the work in compliance with the requirements of the diocesan Historic Churches Committee, and it was project managed by the Ipswich based conservation architect Nicholas Jacob & Associates. On the Thursday before the reopening many parishioners, men women and children turned up, in temperatures in the thirties, to clean and replace statues and other liturgical furnishings.  It was a great opportunity to work together and chat as we worked, often with people who attend a different Mass.

Fr Edmund said: “The parish has been in the very fortunate position that we have not had to do any fundraising or seek any grants towards the cost of the recent repair and redecorating work at Woodbridge.  The generosity of our parishioners has meant that we have been able to fund the work ourselves from existing parish funds.  The repair and redecorating has cost in the region of £67,000.  The professional fees for our architects were paid from our Alive-in-Faith fundraising.”

During the redecoration the Methodists along the road kindly allowed Mass to be celebrated there on Sundays, and Saturday Mass moved to St Clare’s, Framlingham.  Framlingham’s Sunday Mass time changed to fit in with Woodbridge requirements. It was very kind of people to put themselves out to help. It also gave the opportunity for parishioners to meet a different set of people as they attended at the most convenient time for them. We benefitted greatly but it was good to see our friends again.

More photographs can be seen at: www.wfrcp.org.uk