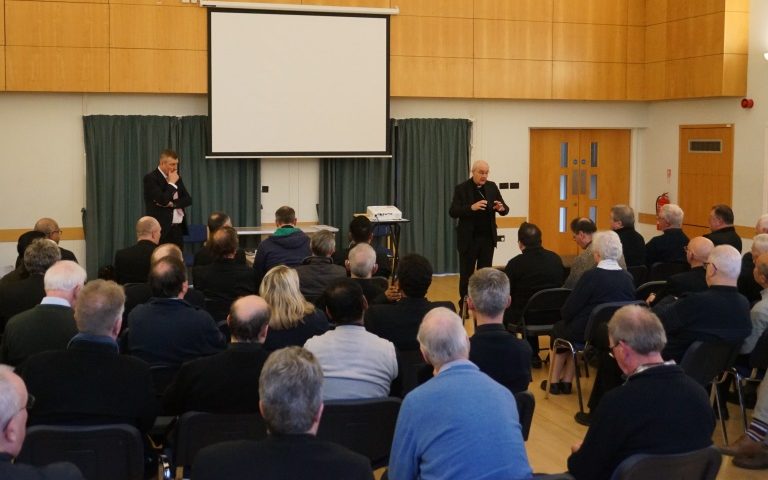 The Diocese has reaffirmed its commitment to safeguarding by organising a mandatory day of training for all priests, religious and deacons.

Liam Ring from the National Catholic Safeguarding Commission facilitated seminars in Poringland near Norwich and in Newmarket on 9 and 10 January. Liam spent 31 years in the police and then served as Safeguarding Officer in the Catholic Diocese of Clifton before taking up his present post.

The two days were attended by nearly 120 delegates and a third day will be held for those who were unable to attend.

Speaking at the Newmarket event, Bishop Alan said: “I hope that today will help priests and religious of the Diocese to be more aware that we are all responsible for making our parishes places where children and vulnerable adults are safe.”

Liam commented that: “the Diocese of East Anglia has been bold to get me early” and said that he expected other dioceses to be contacting him when they heard about these seminars.

He started each day with a question which accentuated the positive: what makes a good priest? As participants began to list the relevant qualities – someone who was discreet, forgiving, gentle, patient, able to fix things – they began to understand that behind each of these good features lay a potential safeguarding hazard.

“If you’re doing it on your own, you’re probably doing it wrong,” explained Liam. He guided the trainees to understand the shift needed from being potentially lone fixers to being people who instinctively sought to gather a team which could bring a variety of insights. 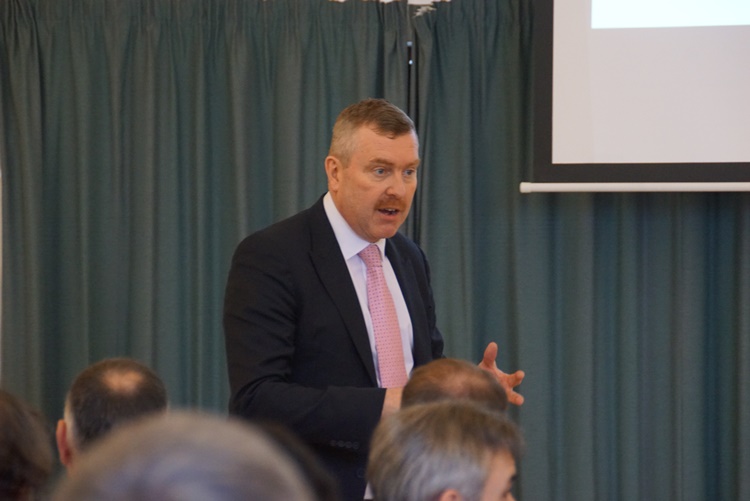 As a life-long practising Catholic, Liam had an astute insight into parish culture, and the training was based on real scenarios which rang true to those present. He warned his listeners not to be put off by the common responses to investigation of “how dare you…” or “what you don’t realise is…”.

For those who were worried by something they saw, he had a variety of mottoes: “Don’t dismiss your suspicions, share information appropriately, don’t think things are better left, and don’t delay: the longer you ignore things, the worse they get.”

Participants broke up into small groups to problem-solve, and then reported back their ideas in plenary sessions. One example was of an non-communicative couple sitting at the back of Mass, with a young son whose face showed signs of bruising. Part of the solution here was to encourage the family to share more openly with their natural support structures – including their own community – so that more people were aware of a problem and could rally around to offer help.

Liam emphasised the extreme vulnerability of babies under 12 months, and encouraged participants to report any suspicion of physical abuse towards the youngest children without hesitation.

Pre-nursery children, he added, were also at greater risk because they lack the safeguard which a nursery or school provides in supplying extra pairs of eyes and ears which can pick up signs of abuse.

“Follow the ABC of safeguarding,” he advised. “Assume nothing, believe no-one, check everything.”

At the other end of the age spectrum, Liam spoke of the need to create dementia-friendly churches. “Let’s speak of people ‘living with’ not ‘suffering from’ dementia,” he said. His practical suggestions included services with familiar hymns, memory cafes where people living with dementia could talk about the past, and signage which pointed to way out of (not just into) toilets and meeting rooms for people who could too easily lose their bearings.

In the next six months, the Diocese intends to follow up this training with a Mass for victim-survivors of abuse.

“Any victim-survivor of abuse from the Diocese of East Anglia is welcome to come and tell their story to me,” said Bishop Alan.  “It is a privilege to listen, and people have told me how much it means to them to be able to tell their story to someone in authority.”