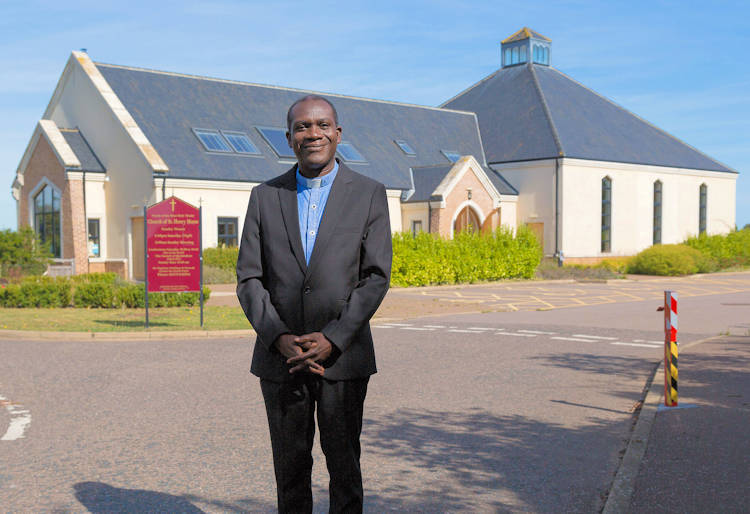 Parishioners in Diss gathered on February 1 for a virtual celebration of the feast day of St Henry Morse, known as ‘The Priest of the Plague’. Judith Tooth reports.

Their church, built in 2012, is dedicated to the local saint who became known as ‘The Priest of the Plague’ for his work caring for the sick.

Parishioners also gave thanks and prayed for the repose of the soul of Joan Westwood, the parish’s eldest parishioner, who had died, aged 101, just a few days earlier. Over many years Mrs Westwood had researched the history of the Henry Morse, shared her findings and encouraged wider devotion for the saint within the parish.

Diss parish priest, Fr Alex Anaman, opened the celebration with the day’s reading from the letter to the Hebrews, which spoke of “men who through faith conquered kingdoms”, some of whom “had to bear being pilloried and flogged…chained up in prison…sawn in half or beheaded”. They were all “heroes of faith”.

“Like them, Henry Morse, our patron saint, was a great hero of faith,” said Fr Alex.

Henry Morse was born in 1595 in the village of Brome, near Diss, and raised nearby in the Tivetshalls, at a time of violent persecution towards Catholics. Despite the dangers he became a Jesuit priest. When plague broke out, he persevered in nursing the sick and dying, undeterred by spells in prison and in exile.

In 1645, without trial, Henry Morse was found guilty of treason for being a Catholic priest, and executed on February 1, at Tyburn in London. He is among the 40 Martyrs of England and Wales canonised in 1970.

At the virtual gathering, Richard Poole shared his recollections of the parish’s pilgrimage to Tyburn on the same day in 2016, and how it had inspired him to search for an artwork of the saint. His efforts resulted in a beautiful 17th century etching which now hangs in the Church of St Henry Morse.