Churches urged to watch out for rural depression risk 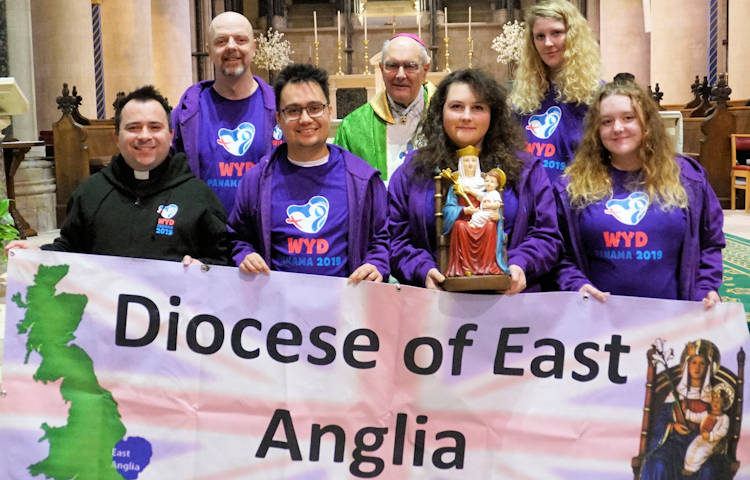 A group of young people from the Diocese of East Anglia will be joining Pope Francis and up to half-a-million other young pilgrims at World Youth Day (WYD) in Panama at the end of January (22-27). Keith Morris reports.

As well as a handful of young people, the East Anglia group will also include two very special members.

Fr Michael Johnstone (aged 85) from Norwich, who has attended eight previous WYDs since 1981 across Europe, Australia and North and South America, will be one of the oldest pilgrims.

Fr Michael said: “For young Catholics it is an eye-opener for them to be with a vast number of enthusiastic fellow Christians and be led by Pope Francis, reminding us of our unity in Christ.

“The crowd is always joyous and I remember Rio de Janeiro where most of us slept on Copacabana Beach for the final Saturday night before Mass for three million people was celebrated by Pope Francis.  Language barriers break down in the swapping of scarves or T-shirts, rosaries or crucifixes, with other people from all over the world.  First world countries pay a premium to enable young from the developing world to visit lands they would never otherwise dream of going to.”

The other special member is a replica of the statue of Our Lady of Walsingham, which will be making its very first visit to a WYD. It’s particularly appropriate, explained youth director Hamish MacQueen, as the theme for this WYD is ‘I am the servant of the Lord. May it be done to me according to your word’.

“This is a quote from the Bible when Mary responded to the angel Gabriel telling her she was going to have a son. Walsingham became a place of pilgrimage after a replica of the very house where this conversation between Mary and Gabriel occurred was built. So an international event with hundreds of thousands of people has an intrinsic link to the small village of Walsingham.”

Jessica McCall, aged 23, from Ipswich, who is part of the Diocese of East Anglia’s Ignite Youth Team based at Walsingham, is making her second WYD trip.

She said: “I had an amazing experience at World Youth Day in Krakow, Poland, three years ago. It was amazing to see so many young Catholics in one place and I am really excited about what we will see in Panama. I am expecting to meet Catholic young people from all over the world and to enjoy the teaching sessions looking at different aspects of the Catholic faith.”

Clive Sheridan, aged 26, from Peterborough, works for a university community sports centre and has been to three previous WYD events.

“Every time I have been to World Youth Day I have had new experiences and it is great to hear the stories of different Catholic young people from across the world at the event and see them all celebrating their faith together.

“The teaching sessions are always really good when we hear from a bishop or a cardinal and other young people about their real life experiences and encounters with God,” said Clive.

The Panama group were blessed by Bishop Alan Hopes at a special Mass at St John’s Cathedral in Norwich last night (January 20), just hours before they were due to fly out.

A prayer vigil in Peterborough is being planned to coincide with the WYD evening vigil in Panama with Pope Francis on Saturday January 26. It will take place at St Oswald’s Catholic Church, from 7.30pm to midnight with people welcome to come and go throughout the evening.

Ignite team leader, Catherine Williams, said: “The vigil is aimed at those aged 16+ and there will be adoration throughout with some worship and reciting hours of the Divine Office.  Our intention is to focus the prayer on interceding for the young people of the world and the people of East Anglia.”

A regular blog will be published following the East Anglia group’s adventure in Panama. Follow it at: www.rcdea.org.uk

Free live TV coverage of all the major WYD events in Panama is being carried on Shalom World, the official media channel, at: www.shalomworldtv.org/wyd2019 and on various smartphone apps.

Pictured above, the East Anglia WYD group with Bishop Alan Hopes at St John’s Cathedral in Norwich last night, hours before they were due to fly out to Panama.