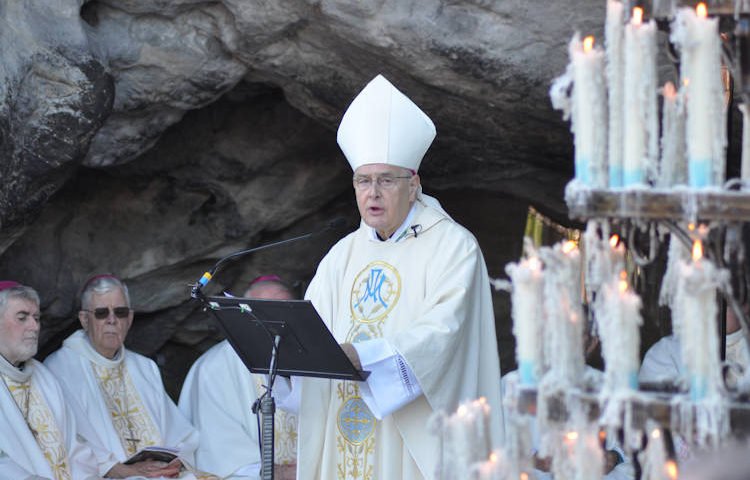 East Anglia also takes more than our share of those who work in the Accueil (hospital), including the whole of the team responsible for the laundry. That said, our numbers were down by about a quarter from previous years, and particularly striking is that we are not taking any youth to help the assisted pilgrims get about.

The reason for the drop in numbers can be in large part explained by the fall of the pound against the euro, and the increasing costs of flying those who need assistance.So the trustees of the Catholic Association are exploring ways of keeping down the costs. For example from 2019 we may go slightly earlier and for one day less (this needs to be worked out). It was not as hot this year as in some other years but there was more rain (and thunder!) None of this dampened the spirits of the eighty of so pilgrims (assisted [or sick] pilgrims, their helpers and pilgrims pure and simple.

Lourdes is quite simply a wonderful place not only because of what happened there in 1858, but because of what happens now. Lourdes seems to me to be closer to the world as it is supposed to be than anywhere else. Here everyone is giving rather than taking, and that very much includes the assisted pilgrims.

A highlight this year was that Bishop Alan, who led the East Anglia pilgrimage as he has every year since he became our Bishop, had the great privilege of being the presiding Bishop at the Mass in the grotto itself. As usual there was Mass daily somewhere within the "domain', the area on both sides of the river close to the Grotto; and there were liturgies of healing (reconciliation and anointing), and an opportunity to go down into the spring which miraculously appeared in the grotto as Bernadette followed instructions from the Immaculate Mother of God.

There were opportunities that some of us took to use the "free day' to go up into the mountains or to the tiny and largely unchanged village of Bartres in which Bernadette spent two short periods of her life. The first was when she had to be wet-nursed by a women who had lost her own child and when her own mother was unable to nurse her; and the second was when she was sent there to work at the age of thirteen, a year before her encounters with The Blessed Virgin Mary. The church where she worshipped offers a different way of getting close to her and her story.

For the past seven years, the diocesan pilgrimage has been directed and organised with great commitment and love by Deacon Clive Brooks of St Marks parish in Ipswich, but he has now stood down and handed over responsibility to myself. At the diocesan Mass midway through the pilgrimage, Bishop Alan thanked Deacon Clive for all that he had done, and presented him with a diptych icon of St Bernadette and of the Immaculate Conception. Clive will be a hard act to follow, but I will do my best to get more from our diocese to come to Lourdes.

Pictured above Bishop Alan presides at the grotto Mass at Lourdes. Picture by JohanBergstrm-Allen.