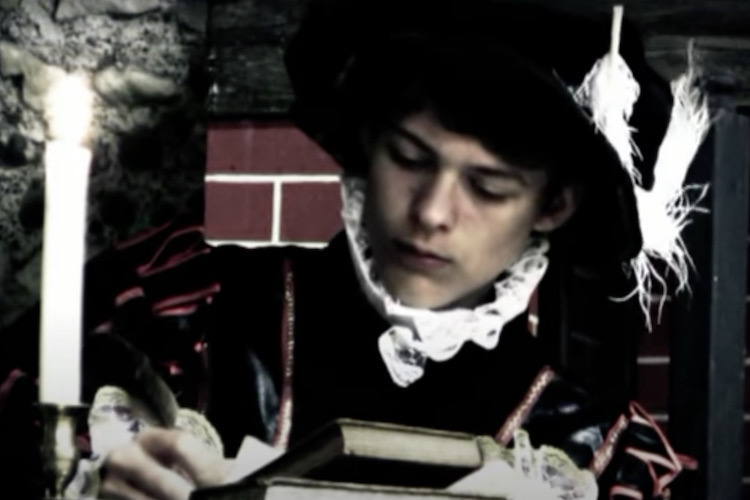 The poet Robert Southwell, who was born just outside Norwich, has provided the title for an online exhibition recalling the Forty Martyrs of England and Wales.

“How bleedeth burning love” comes from a poem by Robert Southwell, who was executed at Tyburn in 1595. He grew up in Horsham St Faith, just north of Norwich. During the reign of Queen Elizabeth I he was one of 800 young men who slipped out of England to train as Catholic priests.

He walked to the English college in Rome, and after ordination returned to England, landing on the Downs between Folkestone and Dover. He evaded his pursuers through sheer boldness, settling in the Strand next door to the Queen, who was searching the land for him, and turning up at the parties of sheriffs who were hunting him, disguised in aristocratic finery.

He was finally betrayed and arrested. “We have a new torture,” reported the Secretary of State, Sir Robert Cecil, “which it is not possible for a man to bear. And yet I have seen Robert Southwell hanging by it, still as a tree trunk, and no one able to drag one word from his mouth.”

Southwell was sentenced to be hung, drawn and quartered for the crime of being a Catholic priest. On the gallows he prayed for the Queen’s health and salvation. Earlier he had written:

“Rue not my death; rejoice at my repose
It was no death to me but to my woe.
The bud was opened to let out the rose,
The chains unloosed to let the captive go.”

Southwell was famous for his literary works, including the sixteenth-century poem ‘Christ’s bloody sweate’ which provided the quote for the title of the exhibition. His poetry had a considerable influence on other writers; there is evidence of Shakespeare’s knowledge of, and reference to, his work in The Merchant of Venice, Romeo and Juliet, Hamlet and King Lear.

The virtual showcase, “How bleedeth burning love”: British Jesuit Province’s Relics of the Forty Martyrs of England and Wales, presents treasured relics belonging to some of the priests and laypeople martyred for their Catholic faith in England and Wales in the sixteenth and seventeenth centuries, many of whom were canonised fifty years ago by Pope Paul VI, on October 25, 1970.

The new online exhibition can now be viewed at www.jesuitcollections.org.uk.

Pictured above is Robert Southwell, from the film by Mary’s Dowry Productions and, below, one of his bones, from the exhibition.

You can watch the full film about Robert Southwell here.