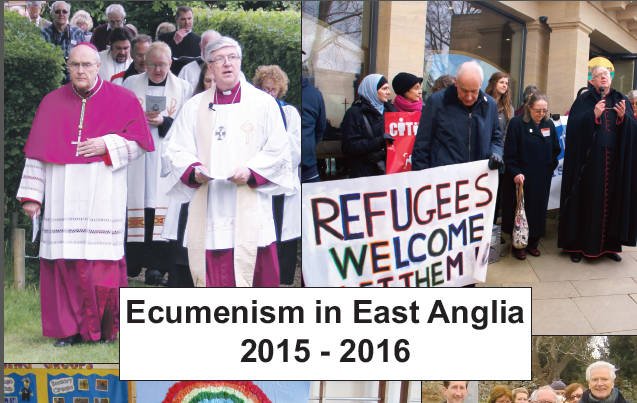 Ecumenism is alive and well across East Anglia with the Catholic Diocese and its representatives playing a full role, according to a survey just published by the Diocesan Commission for Dialogue and Unity.

The Ecumenical Survey revealed that over 120 church and lay representatives from the Diocese were involved in ecumenical bodies in 2015/2016. They ranged from Churches Together and Christians Together groups to church networks, fraternal meetings, Women's World Day of Prayer and foodbanks

In a foreword to the report, Bishop Alan Hopes wrote: "The 50th anniversary of the promulgation of the Second Vatican Council document Nostra Aetate concerning the relationship between the Christian Church, Jews and Muslims was marked in the Diocese by a one-day symposium in November 2015 at St John's Cathedral in Norwich, involving Christians, Jews and Muslims.

"This year is the 500th Anniversary of the writing of his 95 Theses by Martin Luther, which unleashed the Reformation.This anniversary takes place at a time when relations between Catholics and Lutherans have entered a new era of friendship.

"Both of these events bring into focus how in our present world there is a need for constructive dialogue between peoples of all faiths.

"The report concludes that there is significant involvement of members of the Diocese working both locally and as officers of Local Ecumenical Bodies. The ecumenical activities between the churches are much more detailed in this survey and are very impressive. Both spiritual witness and practical projects show the churches working together well,” wrote Bishop Alan.

"It is clear that members of the Diocese have responded well to the challenges facing our present society and in doing so have given considerable witness to the ecumenical cause."

Chairman of the Diocesan Commission for Dialogue and Unity, Dr Geoffrey Cook, said: "It is very encouraging to see from this survey that increasingly the churches and members of other faiths are working together on matters of social concern.”

Priscilla Barlow, County Ecumenical Officer in Cambridgeshire, added her thoughts to the report. She wrote: "One area of ecumenical working that has been increasing in recent years is joint action on social justice issues, and this has seen the establishment of foodbanks, money advice centres, credit unions, refugee support groups and similar groupings in many places.

"These are all areas in which people of faith (and indeed no faith) can work together in their local context "for the common good' and the Catholic Church's strong history of social teaching and action supports this practical way of helping people who are in difficult, sometimes desperate, circumstances. It has the advantage for many people (non-Catholics as well as Catholics) that the "difficult' issues such as Eucharistic sharing are not in the forefront while working together to help others reflects the gospel message in a very clear way."

You can download a pdf copy of the full report here.