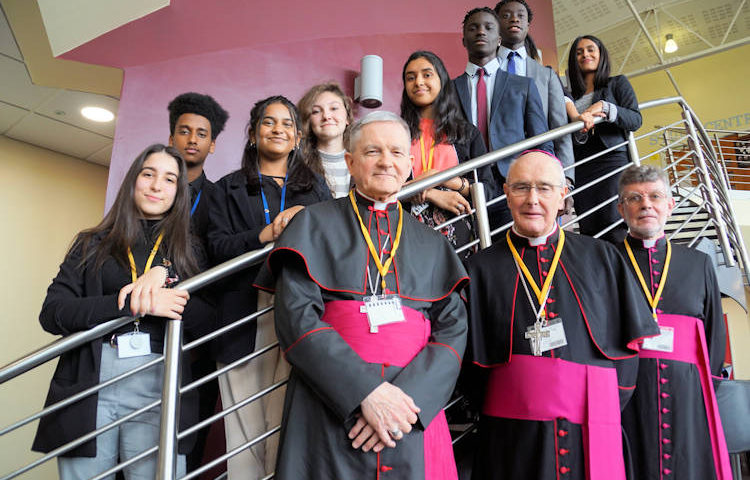 The second day of the Apostolic Nuncio’s visit to the Diocese of East Anglia included meeting the Curia at Poringland, dialogue with inter-faith leaders in Peterborough and visiting two Catholic schools. Keith Morris reports.

His Excellency Archbishop Edward Adams, is undertaking a four-day visit to the Diocese of East Anglia after an invitation to do so by Bishop Alan Hopes.

The day began with Archbishop Adams and his Private Secretary, Mgr Vincent Brady, informally meeting members of the Diocesan Curia from the youth, education, finance and communications departments at the Bishop’s House in Poringland.

Then it was onto St John Fisher Catholic High School in Peterborough where a meeting with leaders of other faiths took place. In attendance were Zahid Akbar from the Peterborough Inter Faith Council and the Faizan Madina Mosque, the Anglican Bishop of Brixworth, teacher Kelsang Rak-Ma from the Drolma Kadampa Buddhist Centre, Iman Shanawaz and Razahusein Rahim from the Husseini Islamic Centre and Ian Harman from St Peter and All Souls Catholic church.

Archbishop Adams brought them greetings from Pope Francis, whom he represents in Great Britain. “Pope Francis is very much interested in what you do and in this type of inter faith dialogue,” he said.

“Dialogue comes from the respect we have for each other and the love of what is true and what is good. Shortly after his election, Pope Francis called for more inter-religious dialogue as a way of building bridges.

“The word Pontiff means bridge builder – someone who helps people connect and not divide. He sees his role as building bridges and establishing real links of friendship between people, especially those who believe in God. The Pope is convinced that the attempt to eliminate God which we see in this present era is something which is not good and will not make people happy or content.

“Belief in God is an essential element in order to defend human dignity, to establish a peaceful co-existence between peoples and to safeguard our creation and environment. All these issues have a direct relationship to God and faith.

“The Pope encourages every effort between people of different faiths for positive relations and constructive inter-action. So I am happy to be here and offer you the best wishes of Pope Francis and to commend you for working together and bringing people closer to God,” said Archbishop Adams.

The Nuncio then celebrated Mass with students and staff members of the chaplaincy team at St John Fisher High School in the small school chapel and spoke to them of how God wants to be close to us and love us.

“When God loves us it changes us, we can’t be the same afterwards. We respond to his love and show our love for him, which can be seen in the way we respond to God and love each other.

“Jesus tells us that love is not just in words, it is also in deeds. Loving God means doing what he wants us to – doing his will. His will and my will together.”

The Archbishop then shared lunch with senior school staff, led by headteacher Kate Pereira and school governors, followed by a question and answer session with a group of sixth formers who asked him about his role as Papal Nuncio.

The Nuncio’s party then moved to the next door St Thomas More Primary School where headteacher Anne-Marie McElhinney was leading an assembly for the school’s 420 pupils.

Archbishop Adams was introduced to the children who asked him a series of entertaining and searching questions about his role, what he enjoyed and found most challenging about it, how old he was and how often he went to the Vatican.

You can follow progress of the Papal Nuncio’s visit online at www.rcdea.org.uk and see pictures at https://flic.kr/s/aHsmctUhUR and below. 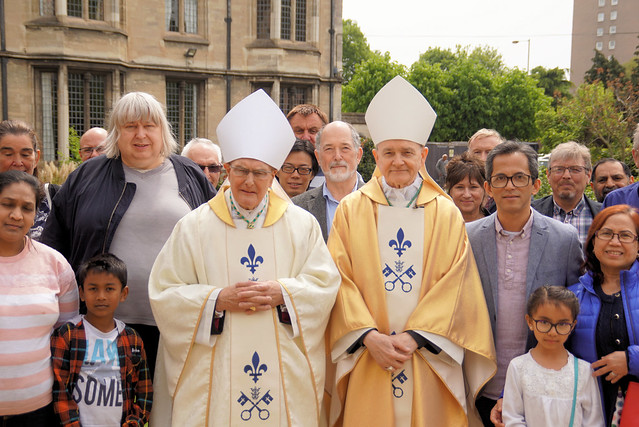