Felixstowe seafarers given Communion after loss at sea

Felixstowe seafarers given Communion after loss at sea 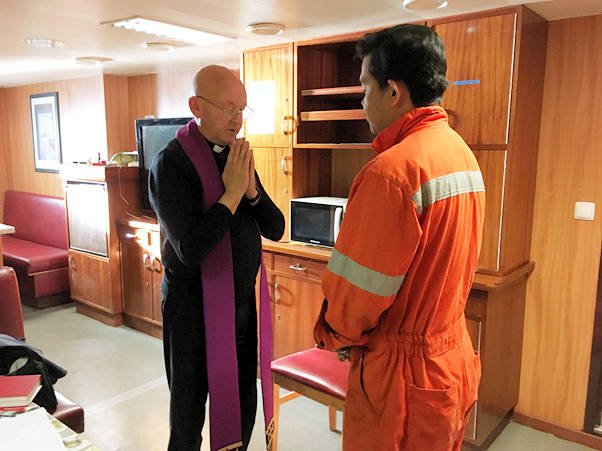 Fr John Barnes, parish priest of St Felix Church, Felixstowe provided Holy Communion to a group of seafarers on board their ship after their crew mate was lost at sea.

The seafarers had requested for a priest to visit their vessel, Industrial Destiny, when it arrived at Felixstowe port on December 6.Patricia Ezra, Felixstowe port chaplain from Catholic seafarers' charity Apostleship of the Sea (AoS), arranged for Fr John to board the ship with her.

Patricia received an email from the ship crewing agent to say the ship had lost a crew member whilst at sea and was requesting a visit by a priest on its arrival at Felixstowe.

"Fr John Barnes was pleased to help and we boarded the vessel at the Captain's invitation.They were on a very short turnaround time and would only be in port for a maximum of six hours," Patricia said.

She added: "As it was an unusual cargo the crew also had to unload it. This meant that stopping for a full Mass was not possible. However, Fr John was able to provide Communion for the seafarers on an individual basis as they became available."

After all who wanted had received Communion, the Captain asked if the bridge and engine room could be blessed.Fr John was very happy to help.

Patricia said: "The ship's crew was consoled by the visit of the priest and the blessing. After six hours in port they then departed for a three-hour stop in Newcastle before heading to Denmark.

"Despite their brief stopover we were glad to be able to respond to their immediate pastoral needs and provide some comfort during what must be a distressing time for them," she said.

Pictured above is Fr John Barnes providing communion to a seafarer on board Industrial Destiny.