Our Lady of Grace shrine in Ipswich celebrated 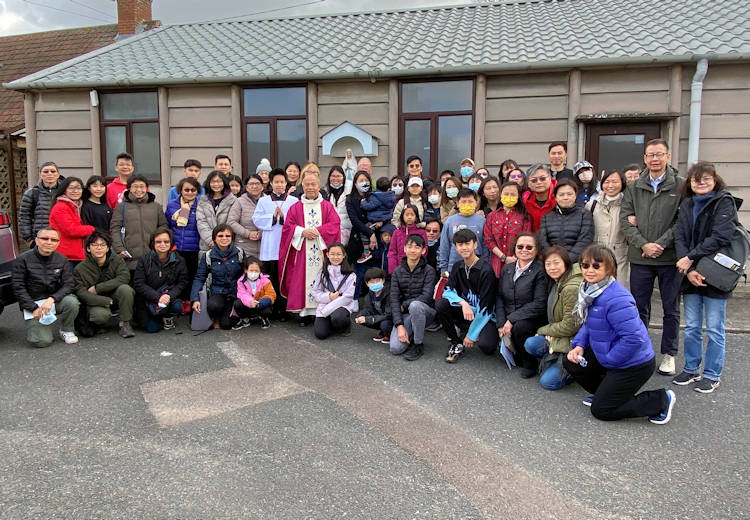 A first-ever Cantonese Mass has taken place in Sawston following the arrival of a number of Catholics in the area from Hong Kong. Dominic Chung reports.

As many as 58 Cantonese-speaking Catholics and their friends, took part in a Mass celebrated by Canon John Minh at Our Lady of Lourdes Sawston (OLOL), on April 7. They came from all corners of the region and beyond. Though he does not speak or read the language, Canon John Minh celebrated entirely in Cantonese, which he learned in record time using phonetics.

Bishop Alan Hopes gave us his blessing and permission. The Auxiliary Bishop of Hong Kong, the Most Rev Bishop Joseph Ha OFM also sent his regards and encouragement in a video clip to all Hong Kong Catholics now living in the Greater Cambridge area. It was truly a momentous day for everyone who had all travelled far and wide to this Mass.

The first Catholic Apostolic Prefecture, under the control of the Macau Diocese, was established in Hong Kong in 1841. This was a precursor to the eventual Diocese, in 1946. Catholicism has been in Hong Kong for much longer, and in China, centuries earlier, since before the arrival of the Jesuit Priest, Servant of God Matteo Ricci, in August 1582. He landed in Macau, died in Beijing and is buried there.

Since the Vatican Council II, between 1966 and 1972, when Mass began to be celebrated in the vernacular rather than just in Latin, there was an explosion of local liturgical and musical developments. Refinement has continued to this day. Much of this rich, sacred tapestry was in Cantonese.

With increasing number of new parishioners from Hong Kong from January, Parish Priest of Our Lady and the English Martyrs, Cambridge (OLEM), Canon Eugene Harkness, acknowledged that “we should do something”.

A welcome note in English and Chinese was published in the parish newsletter and website, encouraging the new settlers to introduce themselves and to register with the parish. Also to encourage a number of Cantonese-speaking parishioners to take part in reading at the 4.30pm Sunday Mass. With the help of Rosina Abudalai, Pastoral Assistant and Diane Redmond, coordinator of the rota for readers, three Cantonese speakers are now regularly part of the rota. There is also a Mandarin reader. This started in March;  to pray a Cantonese Stations of the Cross every Friday during Lent.  And, to plan to celebrate a Cantonese Mass every four months on a Saturday afternoon. The only problem was finding a Cantonese-speaking priest in the UK.

One of the Cantonese Group saw Canon John Minh after a weekday Mass at OLOL and asked, half in jest, if he would consider saying Mass in Cantonese. At first he said no but then said he would try to learn the Mass in Cantonese, using romanization phonetics.

Finding the Canon was an unplanned and unexpected move and we truly believe it is the Holy Spirit who has guided us to his door – he is a generous and spirited pastor. And so, we had our first-ever Cantonese Mass in Sawston.

We know that in the longer term, the Cantonese-speaking Catholics will be much more integrated into the life of their parishes. Their offspring will become fully immersed in their parishes. For the next few years, whilst the new migrants settle and adjust to life in this country, they deserve all our support and prayer. We plan to invite Canon John Minh to celebrate Mass on a Saturday once a month. He is now known to the Cantonese Mass Group affectionately as 康神父 (Fr Hoan)。

How we help the new settlers to receive the Sacrament of Reconciliation is next on the agenda. Maybe a Cantonese Rosary Group, subsequently a Cantonese pilgrimage to the Marian Shrine of Walsingham, or to the Knock Shrine in Ireland, and even much further afield – to Fatima, Portugal and Lourdes in France.

Praise be to the Lord.  These are all possibilities well worth exploring.

The dates for the next two Cantonese Masses have been set:

May 21: to honour our Lady of Sheshan ; at the Basilica there near Shanghai, China. The Chinese Bishops Conference first dedicated China to Our Lady, the Mother of China in 1924. The Emeritus Pope asked the Universal Church to pray to the Lady of Sheshan on May 24, the Feast Day of Mary , Help of Christians.

July 9: to commemorate Saint Zhao Rong, Priest and Martyr with 120 other Catholic Martyrs in China over the centuries, right up to the 1930s .

Pictured above is the Cantonese congregation outside OLOL in Sawston with Canon John Minh.