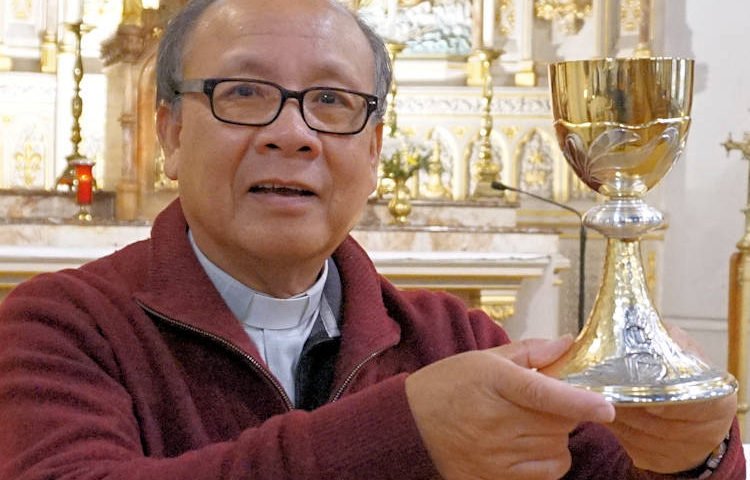 A Lowestoft church which had a valuable silver communion chalice stolen during a heritage open day has received a generous donation from a stranger to enable it to replace the important item.

Our Lady Star of the Sea Catholic church in the town centre opened its doors to the general public during two national heritage weekends in September when its chalice was stolen by a visitor.

CCTV did catch a man behaving suspiciously and leave the church in haste carrying a heavy black plastic bag which he did not have when he went in.

The story does have a happy ending, though, thanks to the kindness of a stranger, said parish treasurer Tony Walmsley: “A parishioner told a non-Catholic friend about the theft and they were so incensed about the tale that they promptly offered to contribute a substantial sum to the cost of a replacement chalice.”

Parish Priest Fr Paul Chanh said: “As Holy Communion is the very heart of the Mass, the vessels we use are very special. Having a chalice stolen was a sad blow indeed, especially when we had opened our spiritual home to the public – which we are determined to continue to do in the future.

“But then we were so lifted up by the generosity of a stranger who wants to remain anonymous. We are so grateful for this wonderful gesture.”

Fr Paul has since been on pilgrimage to Medjugorje, in Bosnia & Herzegovina, where he was able to buy a chalice which matches the style of other vessels already used during Mass at the church.

The Police have the CCTV content and are still pursuing their inquiries over the theft.

Pictured above is Parish Priest Fr Paul Chanh with the new chalice. Picture by Tony Walmsley.