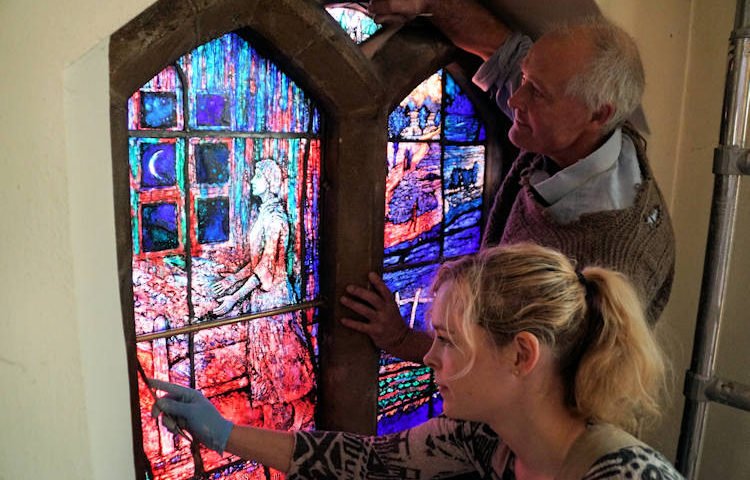 A pair of new stained glass windows by renowned craftsman Thomas Denny have been installed at St Felix Church in Felixstowe, following a bequest from a congregation member. Keith Morris reports.

When parishioner Marlene Strachan died last year she left a generous £10,000 bequest to pay for a stained glass window in the church, on the theme of The Divine Mercy.

Looking to fulfil the request, Fr John Barnes had, four years before, seen some of Thomas Denny’s work at nearby Stutton Parish Church where he had created a Millennium window.

“I thought it was one of the best pieces of contemporary stained glass that I had seen, and resolved that if ever I had a hand in commissioning a window, then the artist who had created this one, Thomas Denny, would be the man whom I would want to use,” he said.

“Ecclesiastical art and artists’ expert Dr Peter Burman agreed that Thomas would be the right artist to approach. I was delighted when he agreed, and found him a most charming and amenable person to work with,” said Fr John.

Thomas has created over 60 stained glass windows including for Durham Cathedral (the Transfiguration Window), for Hereford and Gloucester cathedrals, Tewkesbury Abbey and Malvern Priory. He was also responsible for the Richard III windows at Leicester Cathedral and created the Wisdom Window at St Catherine’s College, Cambridge.

Working with craftswoman Elizabeth Hippisley-Cox from Cumberland, Thomas spent a week in St Felix in late October installing the stained glass, which had taken several months to create, in windows with lots of natural light coming in through them.

“The commission was to make a pair of windows on the theme of The Divine Mercy visions experienced by St Faustina, a Polish nun who had extraordinary encounters with Christ in the 1930s,” explained Thomas.

“In one window her vision of Jesus is depicted with red and blue light emanating from his heart, the light representing the Divine Mercy. He is standing on a shingly shore, reminiscent of the shore of Felixstowe with a curved bay and headland behind, where St Felix might have arrived in Suffolk.

“In the other window is the figure of St Faustina in her wooden boarded monastic cell in Poland and Lithuania in the 1930s. She is aware of the presence and reaching out to it and being affected by it. The narrative reaches across from one side of the church to the other.

“The two outer lights of each window develop the story further. In the right hand window is the nunnery garden St Faustina would have worked in with rows of spinach and lettuce, also a landscape suggesting her vision of roads leading to heaven and hell.

“In the left-hand window, the light of the Divine Mercy coming from Jesus spreads out across the landscape of Poland and Lithuania. There are dark fir woods and tiny distant buildings – perhaps the city of Vilnius – with figures emerging from the landscape and becoming aware of the sanctuary of Divine Mercy. It also refers to Faustina’s vision of the terrible war that was going to come to Poland and Lithuania, which did indeed happen.

“There are a number of Polish people in the current congregation who Fr John hopes will feel a special connection with the windows,” said Thomas.

The designs were seen and approved by the congregation and by a diocesan committee.

The windows were created in a series of stages over several months back in Thomas’s Dorset studio, made in fundamentally the same way as the existing 19th century windows.

Thomas specialises in a method called acid etching, of which there are medieval equivalents. It involves clear glass being covered in a thin layer or two of coloured glass during the glass blowing process.

In this case, the clear glass was covered in a layer of red glass then either green or blue glass, parts of which are removed by the acid etching.

“You can get a lot of subtle nuances of the colours using this method,” said Thomas. “The windows are then erected against a light to add the paint, which is more like drawing on the black details on the surface which is then fired.”

Acid etching for each section of the windows (called a light) takes a week and then the painting takes a month.

Fr John said: “Now the windows are in place, both I and the parish sre delighted with them. Thomas’s style is very distinctive, using very rich colours and somehow achieving both a glowing and a sparkling quality. His windows are full of detail, and the longer one looks, the more one sees.”

So, just over 100 years after stained glass windows were installed in the east end of the church behind the altar, the new windows have now brought colour to the west end.

The windows will be blessed by Bishop Alan Hopes at a Mass at 11am on November 18, at which Thomas will be present.

Pictured above are Thomas Denny and Elizabeth Hippisley-Cox installing one of the windows.

Click on the picture below to see a full picture gallery. 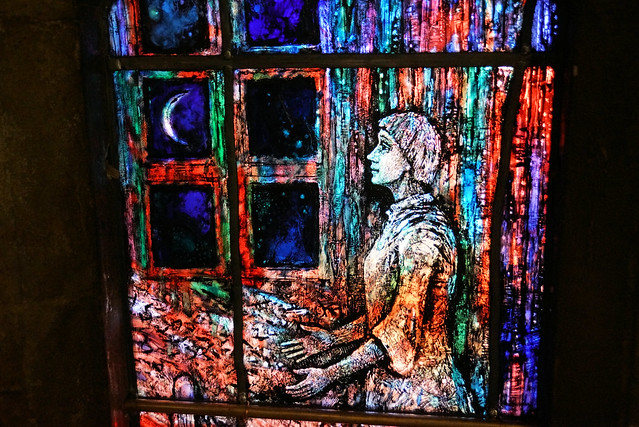