Gorleston six step out to raise £1000 for Cambodia

Gorleston six step out to raise £1000 for Cambodia 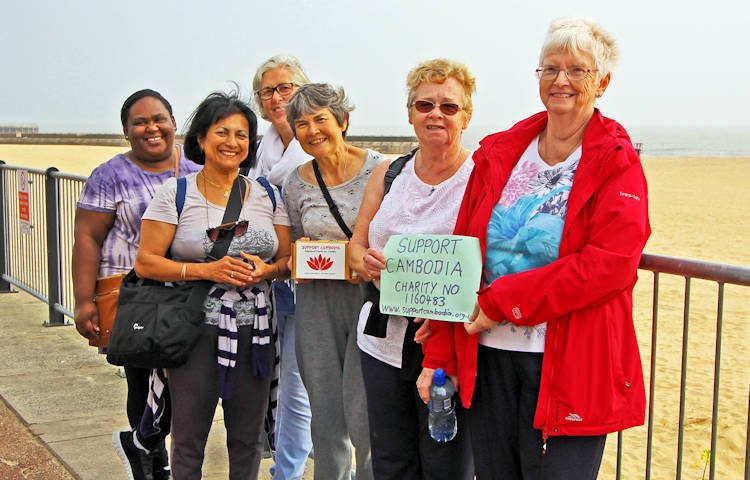 Six parishioners from St Peter's in Gorleston have walked along the seafront and raised £1000 for the independent charity, Support Cambodia.

Interest in Cambodia has been gaining momentum in St Peter's Parish following the visit of Moira Selvage to Cambodia in 2016 with the trustees of the Norfolk-based charity and after money was raised locally to provide much-needed bore wells in Pailin Province in North West Cambodia.

"I experienced first-hand the wells in action leading to the provision of nourishing meals for the children," said Moira. Parishioners have continued to raise money for another bore well in the same area.

"We were all determined to do something for the Cambodian people which would make a difference to their lives," said Moira. "The 30-year war, the terror dictatorship of Pol Pot and the millions of landmines underground have left the Cambodians with deeply wounded hearts and still in poverty. With a little help from their friends' they continue to rise out of the ashes with their resilience and courage."

Moira said: "Although not a church charity, Support Cambodia works in partnership with members of the Cambodian Church to improve the lives of those most in need and their experience has helped us to identify the needs of the disadvantaged communities for whom we have such deep admiration. Projects include water, food, transport, education and hygiene and the charity takes no administration costs from charitable donations."

On September 27, six parishioners from St Peter's, walked along Gorleston seafront to the pier carrying a Support Cambodia charity box.

People donated whatever they had and one lady emptied the entire contents of her purse into our donation box! In less than two hours £64 was collected. Other money was collected by sponsorship from friends, relations and parishioners.

Walker Amy Darby said: "I was grateful for their willingness to support this charity so generously."

Some £250 of the £1000 will provide a community water filter for Nikum village near Battambang and the remaining money will be put towards a clean water project in 2018.

In January 2018, five parishioners will be visiting Cambodia.