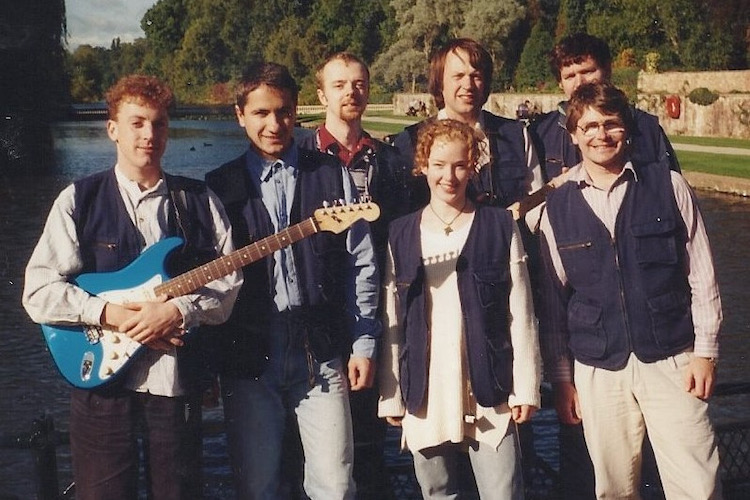 Hamish started the band in 1995 with the aim of sharing the Gospel message through music. They toured extensively throughout the UK and Europe. For a time, they were based in Hamish’s mum’s bungalow in North Walsham, and they played several gigs in East Anglia.

At the height of their success, they played a stadium in Germany and at World Youth Day in Paris. They stopped touring full-time in 1998 and in recent years have rarely played together.

“We never officially split up and have stayed good friends,” said Hamish, “but we all moved onto different things and in different parts of the UK, so it just became impractical to play together very often.”

A few years ago, some of the band started meeting up occasionally and jamming together. This led to recording new material and re-recording some old material with different arrangements. With the advances in technology compared to 25 years ago they have also been able to contribute parts of songs and send them to each other without always meeting.

Then the lockdowns happened, and it meant the keyboard player, David Wood, was able to work on the songs to the extent that they now have a new album – the first in over 20 years.

“I guess there is something quite cringy about a band getting back together when they are much older, but then again, why not?” commented Hamish.

The question now is, will they tour again?  “We’re talking about it,” said Hamish. “I think we’d all like to, but it’s so difficult to find a time when we are all free enough, and at the same time, for it to happen, but maybe one day.”

You can order copies of Revelation’s new CD ‘Thank you Father’ and stream it for free at www.revelationband.co.uk

Pictured above is the Revelation band as it was in 1995. From left to right, Ian O’Shea is now a guitar teacher; Lubosh Uchityl became a policeman; Hamish MacQueen is Diocesan Youth Service Director in the Diocese of East Anglia; Claire Altamura (née Gunton and also originally from East Anglia) works at a Christian performing arts conservatoire in America; Andy Bunting works for the Sion Community for Evangelisation; David Wood works for his family business; and John Bain works with adults with learning disabilities. Also (not pictured as they joined Revelation when the line-up changed), Sarah Darcy works with people with special needs; Carol Cade works with the Cor et Lumen Christi Community; Donna-Marie Povey is an educational welfare officer but also recently had an album in the Top Ten UK Classical Charts; and Andy Jaxa-Chamiec is a priest in the Diocese of Westminster.