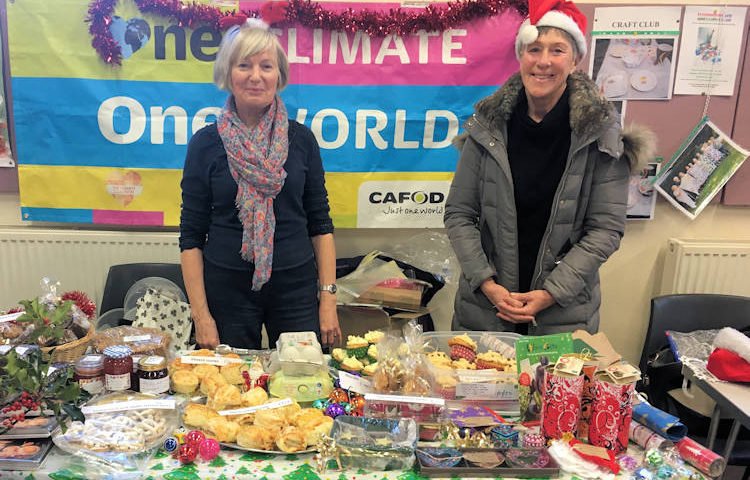 Harleston parishioners are celebrating raising over £750 for charity by holding several stalls at Fressingfield Produce Market during 2017.

Mary Kirk began selling produce to raise money for international aid agency CAFOD at the start of 2014 in her parish of Harleston. When a couple of ardent CAFOD supporters, Mark and Shirley Kalinauckas, moved to the area, the three decided to increase their reach and move the stall to the Fressingfield Produce Market. The stall is held six times a year and offers an opportunity for local people to sell produce to the community.

Each month the CAFOD stall groans under mounds of freshly-baked cakes, sausage rolls, eggs, honey, as well as plants and vegetables. All are supplied by Shirley, Mary and a core group of loyal supporters who never fail to provide every time the stall is held.

The reason that Mary and Shirley raise money for CAFOD is simple. Mary said: "We are committed to ending poverty in the developing world, and also to combating the effects of climate change,supporting refugees and migrants, and living more simply. We want to stand in solidarity with those who have less.

"There's a good footfall in Fressingfield and we are pleased to be a Catholic and CAFOD presence there. It's really great to be in a team and we are blessed in having people who regularly bake and give produce."

The money raised by the stall goes to CAFOD's Connect2 Peru scheme. The parish of Bungay St Edmunds and Harleston, is a Connect2 Peru parish, meaning they hear about and support the work that CAFOD's partner organisations in Peru do, supporting small-scale farming communities as well as human rights work. CAFOD has been working in Peru for 50 years, meaning that the money raised will be building on half a decade of unwavering support.

East Anglia CAFOD rep, Jane Crone, said: "A big thank you to Mary, Shirley and all the others who are involved with the CAFOD stall in Fressingfield. It's fantastic that they are so committed to raising money for those in need overseas and that they're doing so in a way that brings the community together. The money raised in 2017 will make a huge difference to rural communities in Peru and we look forward to seeing what 2018 has to bring."