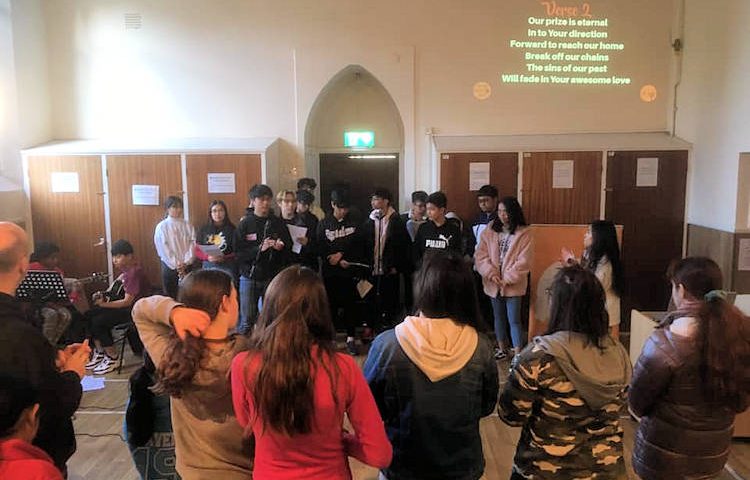 Glow is designed as a day of faith for teenagers, giving them the chance to explore Christ in a deep and dynamic way at a local level. Last academic year, the Ignite Team held Glow days in Norwich and Peterborough, and this year has expanded to include Ipswich and Cambridge.

The schedule at a Glow day includes contemporary praise and worship music, inspiring talks, engaging workshops, and powerful times of prayer. Glow:Norwich was held in November – the first of this academic year. The debut of Glow:Ipswich in January was a blessing – less than a dozen teenagers were expected but 30 showed up for the event! The Ignite Team was pleased with the turnout, especially since the event was new to Ipswich.

The worship music at both events was run by the local Youth for Christ chapter, providing a “for youth, by youth” feel to the events. Glow:Ipswich was fortunate to have a large choir alongside live musicians, and the singers at Glow:Norwich taught the attendees new songs, giving them an opportunity to pray in a way they had never done before.

The topics for workshops at a Glow day are always intriguing. The ones on offer this year have included Faith in Film, Finding God in Pop Music, the Problem of Evil, and Ask Anything, which allows youth to ask literally anything about the Catholic Church, from how it got started in the first place to its stance on homosexuality.

“I expected it to go deep, and it did,” one Glow:Norwich attendee said, after a workshop that explored why evil exists if God is all powerful and all good. “I never knew…” and “Mind blown!” were other common comments from attendees on the workshops.

Many young people had never experienced Eucharistic adoration before attending a Glow day. The schedule at both Glow:Norwich and Glow:Ipswich included this devotion, introducing attendees to its power. Confessions were an option during this time at both events. The confessional was always occupied, a sign that many of the youth were ready to make a deeper commitment to living a holy life.

Overall, young people are grateful for the Glow days, even those who are reluctant to come. “I kind of thought it might be boring,” one Glow:Suffolk attendee admitted, “But it wasn’t.”

There is two more Glow days to be held in 2020. Glow:Peterborough is on Saturday February 15 from 10.45am to 5.45pm at St Peter and All Souls Church on Geneva Street. Glow:Cambridge is scheduled for March 15 at St Laurence primary school. Anyone aged 12-18 is welcome to attend, either individually or as part of a group. For more information or to book, please see www.rcdea.org.uk/youth/events

Pictured above is the recent Glow day in Ipswich.