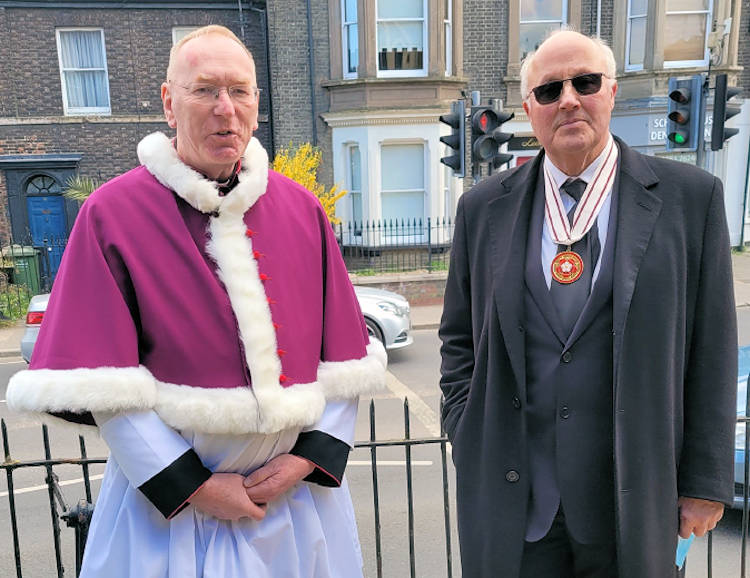 A solemn Requiem Mass for the repose of the soul of His Royal Highness Prince Philip, Duke of Edinburgh, was sung in the Church of Our Lady of the Annunciation, King’s Lynn.

The Mass, which was livestreamed, was celebrated on Friday April 16 at 12 noon. Three priests and two deacons were in the sanctuary. Her Majesty the Queen was represented at the Mass by the Vice Lord Lieutenant of Norfolk, Peter Wilson.

Sandringham House and Wood Farm, where Prince Philip spent his final years, are in the parish of King’s Lynn, and the people of Lynn have always regarded the Queen and Prince Philip as “locals”.

The Mass, which was an Eastertide Mass, included the seafarers’ hymn ‘Eternal Father Strong to Save’, which the Duke had requested for his funeral. Afterwards the Vice Lord Lieutenant said he had been deeply moved by the service.

In the evening Canon Peter Rollings was robed and in choir for the Commemorative Evensong Civic Service in King’s Lynn Minster presided by the Bishop of Thetford.

Pictured above is Canon Peter Rollings welcoming the Vice Lord Lieutenant of Norfolk, Peter Wilson, and below, celebrating the Requiem Mass for Prince Philip. Pictures by Joe Rodriquez.