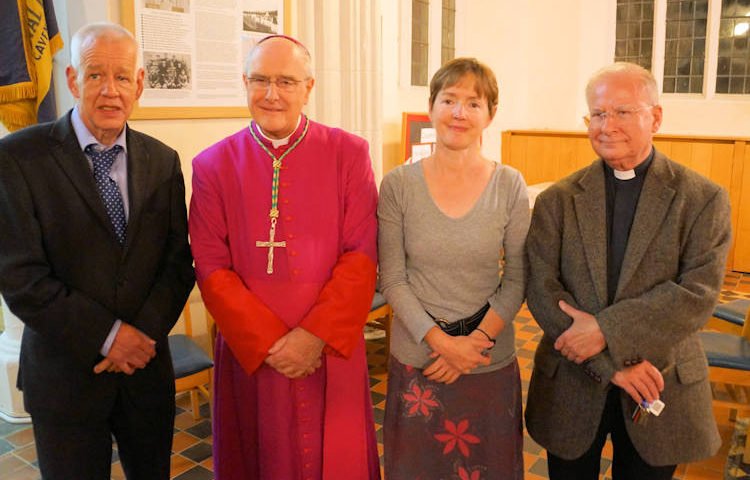 A Memorial Requiem Mass to celebrate the life of Suffolk humanitarian and philanthropist Leonard Cheshire took place last night (September 7), in his home village of Cavendish, on the centenary of his birth.

The Mass, which was celebrated by Bishop Alan Hopes, also marked the start of a campaign by the Diocese of East Anglia to promote his Cause, the first step to canonization as a saint, and was attended by his two children, Jeromy and Elizabeth.

Leonard, who died in 1992, is best known for his work creating hundreds of homes around the world to care for disabled and vulnerable people, much of it with his wife Lady Sue Ryder. He was also an outstanding war-time leader and pilot who was awarded the VC. He converted to Catholicism at the age of 31.

Giving the homily at the Mass was Fr Barry Clifford OSA, who knew Leonard and Sue personally when he was their parish priest at Clare Priory, near Cavendish, in the late 1980s.

He said: "Leonard was certainly a very holy man, a great man. At his memorial Mass in Westminster Cathedral in 1992 I spoke with Bishop Alan Clark and said then that I thought that Leonard should be canonized. I have always believed that and a lot of people did. His faith was very intellectual but he was very holy and down-to-earth. The great quest and commitment of his life was for peace."

Fr Barry spoke of his personal memories of Leonard including one day soon after the great storm of October 1987 when he saw Leonard and Sue climb through the branches of a fallen tree to get to Mass.

After the Mass, daughter Elizabeth Cheshire said: "It was an absolutely lovely and really moving Mass and a very nice and personal homily from a priest who knew Dad in his last few years.

"He would have been very surprised and humbled by the canonization process. He was a really good man and was always motivated by a desire to do what was right and do the things that needed to be done. He was also a truly spiritual person and had a very deep faith. He lived his life through his faith and everything he did in the years that I knew him was guided by that faith."

Fr James Fyfe, who is promoting the Cause of Leonard, explained: "It means to begin to try to collect any evidence for sainthood from among the faithful. There is a prayer card which invites people to pray to Leonard for a particular reason. If the prayers are answered then evidence is collected, examined and presented. This does not mean that we already think he is a saint – that part is a very long way off and it may be 50 or 100 years hence – it is a discovery process.

"Bishop Alan and the Diocese are embarking on the process because Leonard lived in Cavendish. But he is a world-wide figure and many people will be praying for the success of the Cause and we shall reach out to them.However, we shall begin in East Anglia first because there are people here who knew him and remember him and who may have something to tell us."

Before the Mass, which took place at St Mary the Virgin parish church, Bishop Alan prayed at the grave of Leonard Cheshire in the nearby church graveyard.

Anyone interested in the cause, or wanting a prayer card, is invited to contact: Fr James Fyfe, 69 Queen's Road, Wisbech, PE13 2PH.

Details of answered prayers should be sent to Leonard Cheshire Cause c/o The White House, 21 Upgate, Poringland, Norfolk, NR14 7SH.

Pictured above, after the memorial Mass, are Leonard Cheshire's children Jeromy (left) and Elizabeth with Bishop Alan Hopes (centre) and Fr James Fyfe.

Click here to see a picture gallery of the Mass or view below. 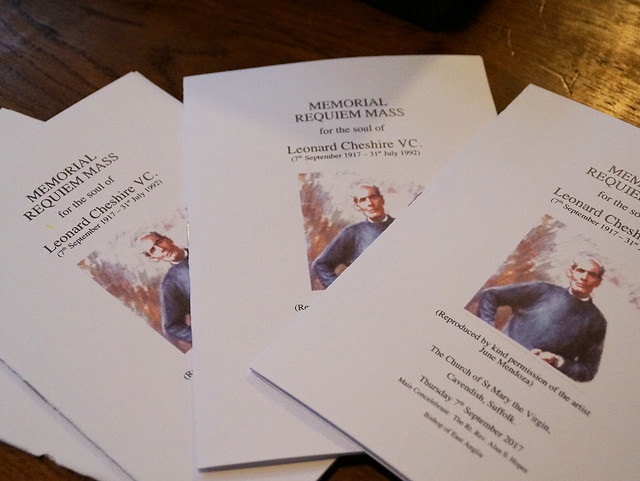