East Anglia schools celebrate Year of the Word in Norwich 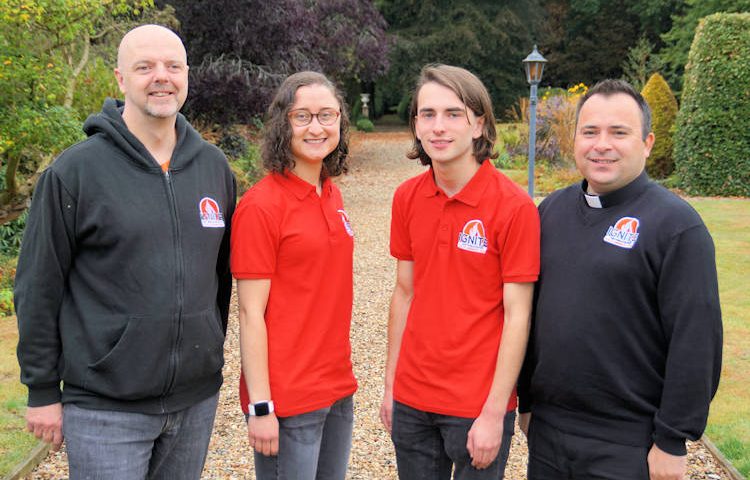 The Ignite Team is now entering its fifth academic year of full-time youth ministry in schools, parishes and at events across the Diocese.

This year’s full-time team consists of Emily Murphy, who is joining from the United States for the year; and Ciaran Losasso who is commencing his third year with the team, along with Fr Luke Goymour (part-time Chaplain) and Hamish MacQueen (Director of Youth Service). Ciaran takes over from Catherine Williams who served the Diocese for three years as Ignite Team Leader.

“I’m excited to see how God will use the team over the coming months,” says Ciaran.  “There are lots of schools and parishes that we hope to return to, but we’d also like to be invited to more places that have never had a visit from the team, including more non-Catholic schools.”

The team, which continues to be based in Walsingham, commences its year with a few weeks of training, prayer and formation in preparation for the year ahead. They’ll spend the rest of the year responding to invitations from parishes and schools around the Diocese to carry out retreats, workshops and other missionary activity with the aim of drawing each participant deeper into relationship with Jesus Christ and His Catholic Church.

The team also help to facilitate events around the Diocese, such as the annual Ignite Festival, for those of secondary-school age.

“We’re hoping to continue to grow our smaller events, such as the Glow Days, which happen in different locations around the Diocese throughout the year,” says Ciaran. “I’d also like to welcome more young adults to our group of part-time volunteers, Ignite Lite.”

With events of their own, and ministry on behalf of schools and parishes, the team will be busy over the coming months. Ciaran recommends booking the team as early as you can: “We welcome bookings all year round but at this stage in the year there’s a lot more flexibility for parishes and schools to be able to choose the date, or dates, they’d like.”

Reflecting on the year ahead, Ciaran adds: “We’re really blessed to have a full-time youth mission team in our Diocese. There’s been a lot to thank God for over the last few years but also plenty of room for growth and improvement. Our work is in the hands of Jesus – we can trust Him to show us what’s next.”

Pictured above is the new-look Ignite Team, from the left, Hamish MacQueen, Emily Murphy, CIaran Losasso and Fr Luke Goymour.