Cherishing buildings where we meet the Lord of Life 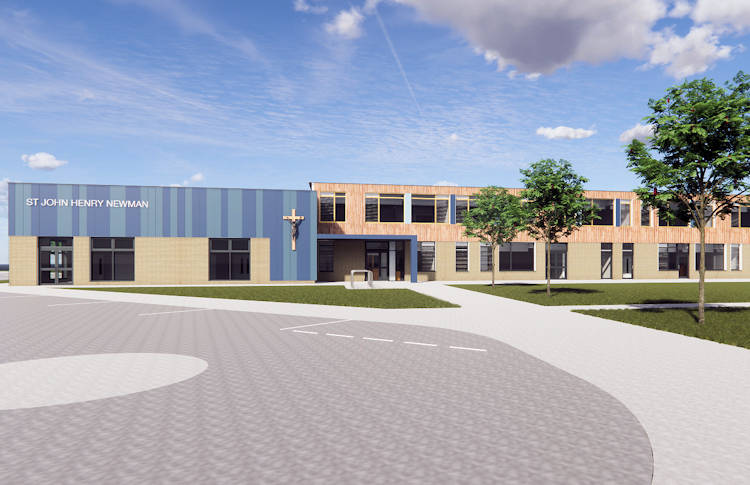 The team behind the new St John Henry Newman Catholic Primary School, set to open in Peterborough in September 2022, has reassured residents that any local child wanting a place at the school is expected to get one.

Answering common questions, the Shadow Governing Body have also set out the timetable for school applications and reiterated that the school will be following the National Curriculum, as do all primary schools.

They have also reassured residents that traffic is not expected to be any more than for any other primary school and that drop-off parking will be provided.

The school is set to open in September 2022 and building work is expected to start on site in early summer 2021. Details of what the school building and site will look like, can be found in a planning applications due to be submitted by the end of January. More details about the application can be found here.

Providing details on schools places, the Shadow Governors said: “We know that this is the biggest concern for parents, especially those living close to the new school. Even though this is a Catholic school, we still expect that every child who wants a place at the school, where St John Henry Newman School is their closest school, will be able to get a place.

“The admissions process for this school will follow the same timetable as for all primary schools and you can find more information about this on Peterborough City Council’s website.”

Addressing resident concerns over traffic levels, Shadow Governors said: “We don’t think this school will cause any more traffic than any other primary school of this size. We don’t believe that lots of pupils will be driven to school from a very long way partly because distance from the school will be a factor in deciding who gets a place in the school.”

Pictured above is an architect’s representation of the new school, courtesy of DLA Architecture.

UPDATE: The Diocese has been made aware of a short paragraph, published in the recent St Luke’s Parish Newsletter, which has caused concern and upset to some Hampton residents. This was not the intention of the statement and for this we apologise.

The statement was a response to the hurt felt by a number of Catholic parishioners as a result of the campaign against the school. Unfortunately, there has been some inaccurate information presented, particularly in relation to admissions to the school, which is why the Diocese has published the FAQs listed above in an attempt to correct some of this information.

The Diocese firmly believes that St John Henry Newman School will be a Catholic school that will serve its local community.