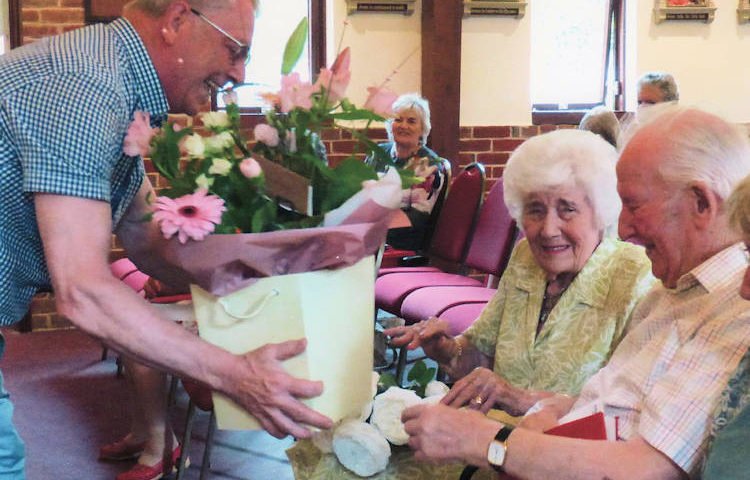 A Norfolk Catholic couple, who met each other as teenagers in 1944, have celebrated their 70th wedding anniversary with a party at St Helen’s Church in Hoveton, reports Liz Smith.

Alf (aged 92) and Margaret (91) celebrated their 70th anniversary on Saturday June 16 at the evening Mass when they were presented with a bouquet of flowers and a card signed by parishioners. A party was held for them after Mass in the church narthex.

Alf was 17 in 1943 when he was told he was going to work down the mines. He met Margaret soon afterwards when introduced by her father, who was in charge of the men in Alf’s sector of the mine and felt sorry for the young lad.

Margaret worked in the Co-op from the age of 17, dealing with ration books.

The couple married in St Philip’s Church in Mansfield in 1948 and moved in with Alf’s parents, in Ketts Hill, Norwich, for a year.

For a while they lived in Spixworth and in 1952 moved to Sprowston, where they have lived in the same house in Spinney Road for around 50 years.

Margaret had many jobs in Norwich and worked at one time in Jarrolds and Garlands. Alf worked for Lushers the builders, as a wood carver and cabinet maker. He made many items for St Helen’s Church, including the font.

The couple have two children, Stephen and Frances.

Pictured above is Terry Mcllwee presenting Alf and Margaret with a card and a bouquet of flowers.