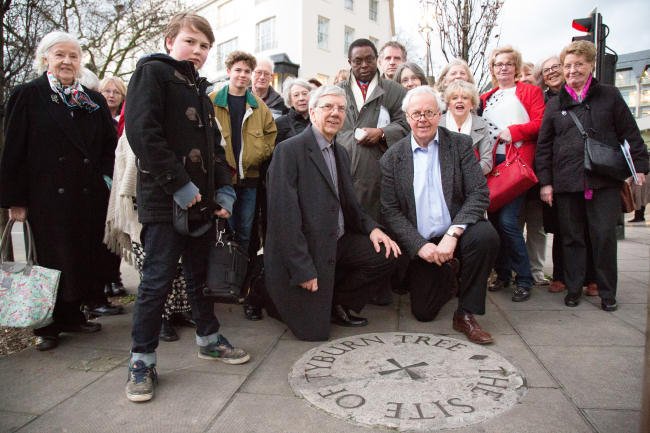 For many years parishioners in Diss, Norfolk, have marked the feast day of their local saint, Henry Morse, with a special Mass and celebration breakfast. This year, they undertook a special pilgrimage. Judith Tooth reports.

On February 1, 35 parishioners travelled to the place where Henry Morse SJ, one of the Forty Martyrs of England and Wales, and the saint to whom the parish’s new church is dedicated, died 370 years ago to the day.

"To come on this pilgrimage is a beautiful thing to do, journeying from his birthplace ' or very close to it ' to Tyburn, London, where, just a few yards from here, he was executed on this day in 1645," said parish priest, Fr David Bagstaff, in his homily during Mass at the shrine. "He had a passionate love for God, and it’s an opportunity for us to renew our love for God today."

Henry Morse was one of 105 Catholics hanged for their faith at the Tyburn Gallows. He lived in turbulent anti-Catholic times, was found guilty of treason for being a Catholic priest, and died a traitor. The shrine is the resting place for the martyrs’ relics, and the altar a miniature replica of the gallows, or Tyburn Tree, as it was known.

The pilgrims were welcomed to the shrine by Mother Catherine of the Benedictine Adorers of the Sacred Heart of Jesus of Montmartre, and prioress of Tyburn Convent. The capital’s busiest traffic junction runs around it, tube trains rumble underneath on the Central line and planes fly overhead to and from Heathrow.

Later, another of the nuns, Sister Lioba, explained how, little by little, she had got to know the martyrs and their stories. They were prepared to go to the bitter ' or, as they saw it, the joyful end. "We just have to live for God: that’s our challenge," she said.

Parishioner Richard Poole, who organised the pilgrimage, said it had been a wonderful day. "Sister Lioba’s presentation was excellent and I found the Mass very moving," he said.

The day finished with a short walk to the recently restored Tyburn Tree Memorial near Marble Arch.