Inside story of Covid lockdown at Walsingham Shrine 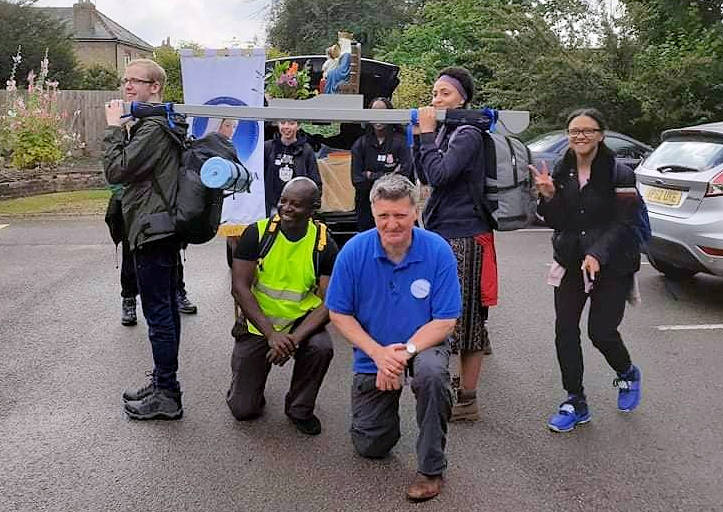 With the challenges of pandemic travel restrictions, the East Anglia Diocesan Youth Service decided to team up with Cambridge-based Radio Maria England for a pilgrimage close to home this summer. Ciaran Losasso reports.

In previous years, the annual Diocesan Youth Pilgrimage has visited destinations as varied as Santiago de Compostela, Iona and Fatima. Every few years, the pilgrimage has joined the World Youth Day celebrations in cities as varied as Panama, Rio de Janeiro and Kraków. Never before, however, has the summer pilgrimage travelled quite so close to home!

We joined Radio Maria England, who were hoping to encourage more young people to join them on pilgrimage to Walsingham, walking and camping along the way.

We decided on the name England’s Way and, after months of careful planning alongside some committed volunteers, on July 28 a group of around 15 set out to walk (most of the way!) from Ely to Walsingham over four days. The route was around 55 miles taking in fens, forest and fields, as well as towns and villages, across the three counties of our Diocese.

The group also included a small contingent who had already walked all the way from Peterborough to Ely to join us. We were also assisted by a support vehicle to carry snacks, water and the occasional struggling pilgrim!

Throughout the course of the walk, the Youth Service statue of Our Lady of Walsingham was proudly carried on the shoulders of members of the group. Though some of us doubted that we’d be able to carry the statue beyond the first few hours of the trip, the statue was in fact carried for the entirety of the walk. It helped us to witness to the reason we were walking and, of course, prompted a few questions and looks from some passers-by.

The joyful and caring spirit of the group was evident in the perseverance they showed, the help they gave to one another and also in the spontaneous singing that our youngest group members initiated – sometimes the Rosary, sometimes the Divine Mercy Chaplet, other times a classic Disney track or two! The singing helped lift spirits when we were tired, soaking wet or ready for our next meal – as we often were!

Camping or sleeping on floors presented its own challenges, but we were grateful for the hospitality and cooking of others along the way including at St Thomas’ Church, Brandon; Swaffham Rugby Club; Sacred Heart Primary School and from parishioners at Our Lady of Pity, Swaffham. Spending time with the Lord at daily Mass was an important part of each day, as were the times for silence and reflection and the times for laughter and conversation.

The route was not always easy – on more than one occasion we got lost, at one point needing the assistance of a friendly farmer in his tractor to hand-draw us a map and allow us to pass through his wheat field!

“I think it was a good experience,” remarked 19-year-old pilgrim Marie-Therese about the trip. “It’s humbling ‘cause you see you can’t do [all those] miles without Mary!” We were also blessed to be accompanied by two priests, Fr Arockiya Seelan and Fr Piotr Wygnanski, who ably saw to the spiritual needs of the group and whose presence was especially appreciated.

For one 20-year-old pilgrim from Cambridgeshire it was his first time on any sort of pilgrimage. “I think it’s definitely done a lot for me. I had my first Confession… which is something I don’t think I would’ve done if I wasn’t on a pilgrimage,” he said.

It is hoped that England’s Way will become an annual trip in its own right in future years. For us, it certainly was an unforgettable and worthwhile experience to journey with Our Lord and His Mother.

You can hear more from the pilgrims who went on England’s Way on the Radio Maria England show Testimonies from Walsingham: https://tinyurl.com/englandswaypodcast.

Pictured above are the England’s Way pilgrims with Radio Maria England President Charles Wilson (in blue) outside St Etheldreda’s Church in Ely.