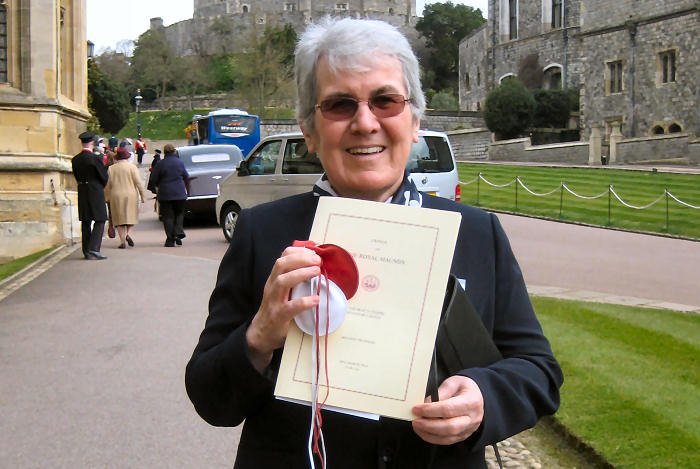 Sister Mary Clare from the Daughters of Jesus in Peterborough, has been honoured for her Christian community service by the Queen, who presented her with Maundy Money, along with 179 others from across the country, at Windsor Castle on March 24.

Sr Mary Clare, who was one of three people nominated by the Bishop of Peterborough for the honour, was personally given the Royal Maundy coins by the Queen in the traditional Maundy Thursday ceremony at St George's Chapel.

Bishop of Peterborough, the Rt Revd Donald Allister, said: "Sr Mary Clare is a great servant of the Roman Catholic church in Peterborough, but much more. She is very active in developing friendship and co-operation between different churches and a key player in Christian ministry to prisoners and to the underprivileged in our city. A real saint, and a lovely person."

Sr Mary Clare said: "To take part in this service was a moving experience, very prayerful, even with all the pageantry it contains ' it has certainly been an honour which I will remember for a long while."

The origins of the ancient ceremony of giving of alms and the washing of the feet on Maundy Thursday goes back to fourth century Spain and Italy. The first recorded Royal Distribution was by King John in 1210.

The number of recipients is related to the years of the sovereign's life and to mark the Queen's 90th birthday, 90 men and 90 women were selected from Dioceses across the country because of the Christian service they have rendered to the church and the community.

All recipients received two purses of money, one white, the other red. The white purse contained, in Maundy coins, silver pennies, twopences, threepences and fourpences, adding up to the Queen's age. The red purse contained a personal gift from the Queen of a five pound coin ' marking her 90th birthday and a 50 pence coin commemorating the battle of Hastings in 1066.

The honour is the second for Sr Mary Clare this year, as in February she was honoured for her outstanding contribution to the city of Peterborough with a Community Involvement Civic Award, which was presented at the Town Hall.

Sr Mary Clare, who is based at St Peter & All Souls Church, was given the award for: "Her outstanding contribution to the work of the Fairtrade Peterborough steering group. Her commitment to changing the lives of those in need is demonstrated through her work on the Inter-Faith Council and many other bodies," read the citation.

The Peterborough Civic Awards aim to recognise residents, groups, organisations and businesses that have made a real difference to their local community.

Sr Mary Clare is also an active member of Churches Together in Central Peterborough – Community Group and the diocesan representative for refugees in Peterborough.

"I act as the link between the group and the City Council to see how we can best help those in need – homeless folk, ex-prisoners and those trying to curb their addictions," she explained.

Sr Mary Clare is well-known across the Diocese of East Anglia as a former teacher in Peterborough, King’s Lynn and Thetford as well as being a Prison Chaplain at HMP Edmunds Hill and HMP Peterborough.

Pictured above is Sr Mary Clare at Windsor Castle with her bags of Maundy Money.